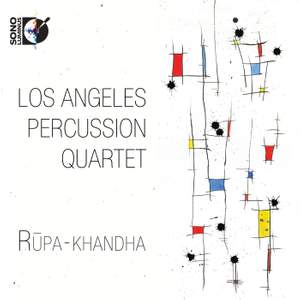 Sono Luminus is proud to release this first major studio release by the Los Angeles Percussion Quartet, Rūpa-khandha, as it promises a fantastic listening experience. As one of the new percussion recordings produced in surround sound, the listener is placed among a sonic landscape of sublime, visceral, and exotic percussion instruments, with the full force of the quartet’s technique and artistry applied in interpreting four evocative, award-winning, and never before recorded works. Considering the combination of hundreds of individual instrumental colors and the LAPQ’s formidable talent, Rūpa-khandha promises to be among the most sophisticated and aurally stunning recordings of percussion chamber music. The package will be a 2-disc set, containing a Blu-ray™ Surround Sound disc as well as a standard CD.

The Los Angeles Percussion Quartet is Matthew Cook, Justin DeHart, Eric Guinivan, and Nick Terry. Since 2008, the LAPQ have endeavored to champion the percussion-focused music of California’s great maverick composers, in addition to actively collaborating with tomorrow’s promising new artists from around the globe. Throughout California, the LAPQ have delighted audiences with fresh interpretations from the standard percussion ensemble repertoire, and many of their newly commissioned works have received awards from the FROMM Foundation, Theodore Presser Foundation, Broadcast Music Inc. (BMI), and the American Society of Composers, Authors, and Publishers (ASCAP).