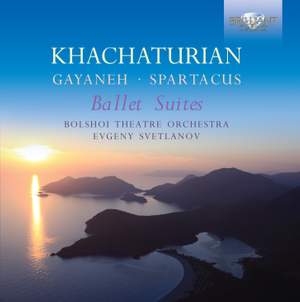 Dance of the Rose Maidens

Dance of the Highlanders

Introduction – Dance of the Nymphs

Scene and Dance with Crotalums

Dance of the Gaditan Maidens

Aram Khachaturian, 20th century Armenian composer, kept the Soviet authorities happy: his music is accessible, melodious, dramatic, folkloristic and glorifies the victory over evil forces. The ballet suites Spartacus and Gayane enjoy huge popularity, not in the least because of the Sabre Dance and the Adagio from Spartacus, which were used in many commercials, films and TV series. No better champion for this sumptuous orchestral music then the great conductor Evgeny Svetlanov and his Bolshoi forces, showing enough refinement and taste to prevent hollow bombast.

Along with Shostakovich and Prokofiev, Khachaturian was one of the most famous and celebrated composers of the Soviet Union. Born in Tbilisi, Georgia, his earliest musical influences were the folk music of Georgia and of his ancestral homeland, Armenia. His ballet Gayaneh, composed in 1942, tapped into this passion for his Armenian heritage; set on a collective farm, its story is concerned with the triumph of love and loyalty to the Motherland over treason – themes that would keep Stalin happy.

Khachaturian’s later ballet Spartacus, written in 1956, took the famous story of the Greek slave turned gladiator and his defeat of the Roman general Crassus as its basis. Composed in the dying years of Stalin’s rule, Khachaturian and his audiences were drawn to the story’s theme of resistance against tyranny. Several movements from these ballets have taken on a life outside the original ballet suites – for example, the Sabre Dance from Gayaneh and the famous Adagio from Spartacus – ensuring that these wonderful and colourfully scored ballet suites have become firm favourites in the concert hall.