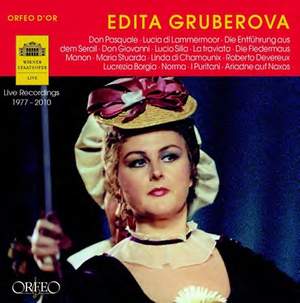 an excellent portrait of the artist — International Record Review, October 2012

If opera enthusiasts had to choose a singer as the quintessential coloratura soprano, the name of Edita Gruberova would be bound to come up. To the delight of her audiences, she has spent the last four decades exploring every corner of the coloratura repertory. The fact that throughout this period she has retained her timbre, flexibility and an upper range extending above top C is due to two factors: her sovereign technique and her intelligent choice of repertoire.

After making her professional début with a provincial company in her native Slovakia, Gruberova joined the Vienna State Opera, which remains her artistic home to this day. This new compilation of high points from Orfeo's Wiener Staatsoper Live series showcases her earliest decisive successes in the sort of lighter coloratura roles often sung by soubrettes: Norina in 'Don Pasquale' and above all Zerbinetta in 'Ariadne auf Naxos', a role to which she returned for 35 years. Lucia stayed for 30 years, allowing her to cast a powerful spell on audiences not only in Vienna but all over the world.

Starting with Lucia and with three of Mozart’s soprano roles, Donna Anna, Konstanze and Giunia in the rarely heard 'Lucio Silla', she began to develop in the direction of dramatic coloratura roles, a development that finally enabled her to tackle Bellini’s 'Norma'. Between these two extremes, Edita Gruberova’s career contains many other milestones that may all be enjoyed in this portrait from Vienna. Roles represented here include the titular heroine of Verdi’s 'La traviata' (with Alfredo Kraus as one of her many world-class partners), the flighty Manon in Massenet’s opera of the same name – one of only a handful of excursions into the French repertory – and her irresistible Adele in Johann Strauss’ operetta, 'Die Fledermaus'.

Central to the second half of Edita Gruberova’s 40-year reign at the Vienna State Opera are leading roles in bel canto operas, operas which without her be even more of a rarity: Elvira in 'I Puritani' and four of Donizetti’s dramatic coloratura roles, Elisabetta in 'Roberto Devereux' plus Maria Stuarda, Linda di Chamounix and, most recently, Lucrezia Borgia.

an excellent portrait of the artist