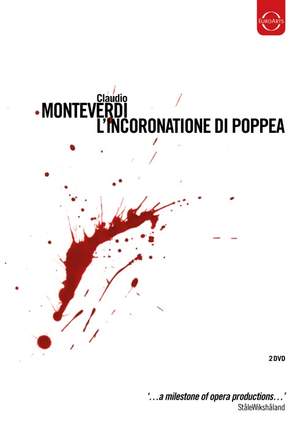 It relentlessly portrays the leaders of the Roman Empire as violent, sex-mad adolescents...There is, though, some truly terrific singing here. Birgitte Christiansen (Poppea) is an amazingly assured... — BBC Music Magazine, June 2012, 4 out of 5 stars More…

Staged by Ole Anders Tandberg, adapted and filmed by Anja Stabell and Stein-Roger Bull in 2010 at the Norwegian National Opera.

The Coronation of Poppea was the début production from critically acclaimed stage director Ole Anders Tandberg in the Norwegian Opera & Ballet, and he lets blood flow. TV directors Anja Stabell and Stein-Roger Bull reinforces the impact by letting blood’s bright color compete against black and white images. Poppea like you’ve never seen it before!

At the centre of events is the power-crazed Poppea. She aspires to the top level of the hierarchy and seduces Emperor Nero. He is totally captivated by Poppea and does everything possible to marry her, even if it leads to murder. A classic drama unfolds, where the struggle for power and riches paints an unattractive portrait of humankind. In this respect not much has changed since the opera was written 365 years ago.

It relentlessly portrays the leaders of the Roman Empire as violent, sex-mad adolescents...There is, though, some truly terrific singing here. Birgitte Christiansen (Poppea) is an amazingly assured musical presence, who can colour her voice to fit every occasion. Jacek Laszczkowski (Nero) is expressively menacing and lascivious by turn

How best to depict these grotesques for a 21st-century audience? Ole Anders Tandberg's solution is to put them in modern dress and to have them indulge in what the booklet-note calls 'frequent lashings of blood and sex'...as for the blood, for lashings read buckets. Jacek Lazczkowski plays Nero brilliantly as a complete psychopath...the best [singing] is from Tim Mead and Patricia Bardon.

Patricia Bardon's powerful voice makes a wonderful Ottavia...While the idea of making a TV production of an opera is certainly laudable, the choices in this production seem to be those that would push away many viewers. It seems as though everything in the direction and staging is designed to be an "effect", turning the characters into mere puppets.