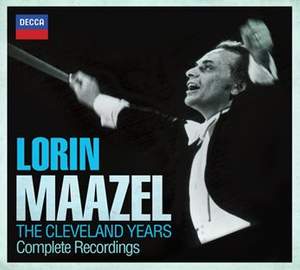 Lorin Maazel, who led more than 150 orchestras in more than 5000 opera and concert performances, died on 13th July 2014. A child prodigy, Lorin Maazel conducted most of the major American orchestras. Toscanini nurtured his talent, inviting him to conduct his NBC orchestra at the age of 12.

Lorin Maazel’s first recordings for Decca were made in 1962 with the Israel Philharmonic when he recorded Overtures by Beethoven and Stravinsky’s Petrushka. During the 1960s, Maazel recorded cycles of Sibelius and Tchaikovsky symphonies with the Vienna Philharmonic Orchestra – recordings which have been staples of the Decca catalogue ever since - and with the same orchestra recorded several works by Richard Strauss. A musician of broad musical sympathies, Maazel was equally at home in opera as in symphonic repertory. His last recording for Decca was Verdi’s Aida made at La Scala in 1986 and with a star-studded cast including Pavarotti.

Between 1972 and 1982 Maazel was Music Director of the Cleveland Orchestra and between 1973-79 made a series of recordings for Decca – all of which are collected here.

The repertory includes many orchestral spectaculars and Decca’s first recording in Cleveland, Prokofiev’s Romeo and Juliet, is one of the very best and a recording which has achieved reference status. “…The precision of The Cleveland Orchestra is little short of miraculous… the recording is one of Decca’s most spectacular, searingly detailed but atmospheric too” (The Penguin Guide).

Another highlight of Maazel’s Decca/Cleveland discography is the 1975 recording of Gershwin’s Porgy and Bess. This was the first complete stereo recording of the work and Gramophone was lavish in its praise: “The actual sound quality is amazingly vivid… the sound remains electrically brilliant with the brass and percussion superbly caught… his masterpiece has at last been so triumphantly presented on record. It is above all a triumph for Lorin Maazel, arguably his richest recorded performance to date”.

In 1982, Time Magazine famously lauded Maazel, observing that under his watch, the Cleveland Orchestra became "the most beautifully balanced American ensemble".

Includes a 100-page booklet featuring an essay by Andrew Stewart in English, French and German.