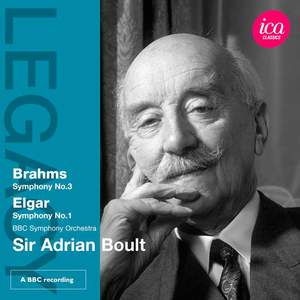 the sense of joyous homecoming in the closing pages is truly overwhelming in its cumulative impact and rightly accorded a thunderous ovation. There's much that is cherishable, too, in the performance... — Gramophone Magazine, August 2012 More…

One of the great British conductors of the 20th century, Sir Adrian Boult studied under the legendary Arthur Nikisch in Berlin, which makes his Brahms interpretations so special.

Similarly his friendship with Sir Edward Elgar ensured that all his interpretations of the composer’s works were without question authoritative, achieving an iconic status.

The Proms recording of Brahms’s Symphony No.3 from 1977 is in superb stereo and represents Boult’s ‘golden years’. He recorded two cycles of Brahms symphonies in 1954 and in the 1970s but all in the studio, whereas this ICA recording catches him ‘live’ producing a sense of drama and passion. Martin Cotton comments in his booklet notes, ‘Perhaps most surprising is the final Allegro where there is an organic shape to the movement which doesn’t compare with the rather more staid LSO (studio) recording of seven years earlier.’ In his notes, Martin Cotton emphatically states that the 1976 ‘live’ recording in wonderful stereo of Elgar’s Symphony No.1 from the Proms, ‘is completely astonishing’. Boult, one of the last living conductors to have known Elgar, had effectively been blessed by him: ‘I feel that my reputation in the future is safe in your hands’ – and here he gives what is arguably his greatest performance of the work. Cotton attended the 1976 concert and describes it as ‘one of the greatest musical experiences of my life’.

Boult’s recent recording of Brahms’s Symphony No.1 coupled with Elgar’s Enigma Variations (ICAC5019) was acclaimed in International Record Review: ‘This is a very powerful reading, from the quite fast introduction of the first movement to the triumphal close. Much the same can be said of the Elgar “Enigma” Variations from the Royal Albert Hall Centenary Concert in 1971, again with the BBCSO. Boult keeps “Nimrod” flowing, but in the finale his speeds are more flexible – starting steadily, then pushing on. It all works extremely well.’

This CD represents stunning value at over 81 minutes long.

the sense of joyous homecoming in the closing pages is truly overwhelming in its cumulative impact and rightly accorded a thunderous ovation. There's much that is cherishable, too, in the performance of Brahms's Third...Again, Boult's contribution evinces a sureness of purpose, unassuming honesty and lofty wisdom that stem from a lifetime's experience...generous coupling that shows the veteran Boult at his inimitable best. Absolutely not to be missed.