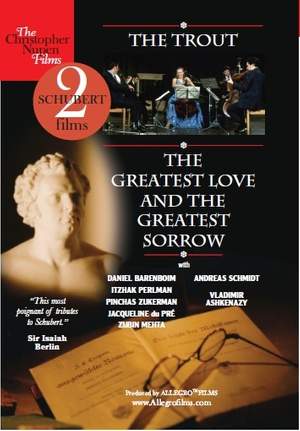 This re-release — an improved version of Christopher Nupen’s Schubert DVD — contains two of his most famous films: The Trout, which is almost certainly the most frequently broadcast classical music film in the history of television and Franz Peter Schubert: The Greatest Love and the Greatest Sorrow which many people think is his best — perhaps because it was 10 years in the making.

As with most of Christopher Nupen’s DVDs this one contains two films which are entirely different in style and character from one another.

The Trout which was shot in 1969 is an explosion of youthful exuberance that was unlike anything that had ever been seen before. The protagonists were unknown to the general public when the film was shot but have since come to be recognised as being among the most affectionately remembered musicians of our time. Their names: Daniel Barenboim, Itzhak Perlman, Pinchas Zukerman, Jacqueline du Pré and Zubin Mehta.

Franz Peter Schubert: The Greatest Love and the Greatest Sorrow was described by Sir Isaiah Berlin as, “This most poignant of tributes to Schubert.” It is not a film about Schubert’s life. It is a film about his extraordinary achievements in the last 20 months of his life after the death of his god, Beethoven. Schubert himself said, “Who, after Beethoven, may dare to do anything.” The answer was Franz Peter Schubert, who took the language of music forward into new and uncharted territory once he was liberated from his own profound respect for his predecessor. However, unlike Beethoven, he does not sing of the fullness of the earth. Instead, he laments for our mortality and what he has to say, ranks among the greatest achievements in music. The musicians are Vladimir Ashkenazy, Andreas Schmidt, Antje Weithaas and Michael Sanderling.

Nominated at Banff and winner of Czech Crystal at Golden Prague.