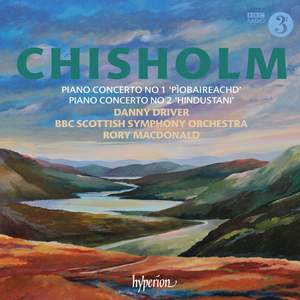 Chisholm was himself a formidable pianist, and both Concertos teem with the kind of brilliant bravura keyboard writing that is meat and drink to Driver. The orchestration is colourfully, but... — BBC Music Magazine, June 2012, 5 out of 5 stars More…

Who was Erik Chisholm? A fascinating musical polymath: composer, conductor and performer, and collector of folk music from his native Scotland. Born in Glasgow in 1904, his attitude to music was progressive, looking towards central European modernism (he was dubbed ‘MacBartók’). Chisholm’s understanding and mastery of the piano—he performed the Scottish premieres of Rachmaninov’s Third and Bartók’s First Concertos—is evident in his two concertos. The first, ‘Pìobaireachd’, literally ‘pipe music’—that of the classical Highland bagpipes—uses these sinuous traditional themes to thrilling effect in a work that’s both exotic and lyrical; the ‘Hindustani’ concerto was inspired by Chisholm’s posting to the Far East during the Second World War and friendship with Sorabji, and is based upon a series of ragas.

Hyperion rising star Danny Driver is the scintillating soloist alongside the BBC Scottish Symphony Orchestra and Rory Macdonald in these captivatingly original works.

Chisholm was himself a formidable pianist, and both Concertos teem with the kind of brilliant bravura keyboard writing that is meat and drink to Driver. The orchestration is colourfully, but conductor Rory Macdonald has it well in hand. Revelatory.

Chisholm's modernist music is as extraordinary and perplexing as it is beautiful...[he] emerges as a composer in full command of both the orchestra and the piano, expertly employing their respective resonances and timbres...Driver is in equally full and exuberant command of his instrument. His confident, crisply embellished readings are stylish, multi-hued, and enlivening nailings of the modernist tone

It would be difficult to overpraise this wonderfully enterprising disc...and it would be hard to imagine playing of a more coruscating brilliance, delicacy and affection. The superb Danny Driver gives his all and is partnered to the hilt by the Scottish conductor Rory Macdonald.

These substantial works receive carefully prepared and strongly committed performances that seem to do this wonderful music full justice; so does the superb recording. Full marks, too, for John Purser's well-informed and detailed insert notes. In short this is an important release and a most welcome addition to this distinguished composer's expanding discography.

[Chisholm's First Concerto is] full of provocative rhythm and utterly devoid of cliche. His second is even more elaborate, drawing its inspiration from the beguiling ragas of Hindustan, their evocative intervals and sensuous, twisting melodies handled beautifully here by Danny Driver in this premiere recording.