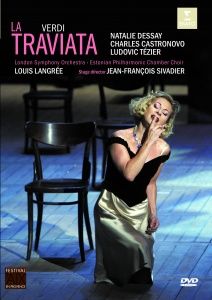 This is one of the most truthful and moving realisations of Verdi's La Traviata I could ever imagine...such is its intelligence in focusing on the essentials of the characters and the action... — BBC Music Magazine, May 2012, 5 out of 5 stars More…

Natalie Dessay made her first European appearances as Violetta in La traviata in a new production by the French director Jean-François Sivadier at the 2011 Aix-en-Provence Festival. This DVD captures her intense performance in the company of American tenor Charles Castronovo as Alfredo and French baritone Ludovic Tézier as his father, Giorgio Germont. “Her theatrical impact is devastating,” wrote the Financial Times.

With this new production of La traviata at the 2011 Aix-en-Provence Festival, Natalie Dessay made her first European appearances as Verdi’s Violetta, a pinnacle of the soprano repertoire. She made her debut in the role in 2009 at the Santa Fe Festival in the US, and subsequently sang Violetta in Japan. Dessay’s 2011-12 season will include La traviata at the Vienna State Opera (in this Aix-en-Provence production by French theatre and opera director Jean-François Sivadier) and the New York Metropolitan.

Violetta makes tremendous demands on a singer, both vocally and dramatically, and signals Dessay’s transition from lighter coloratura roles to the more full-blooded lyric repertoire. “I’m tired of playing weeping girls,” she told the French magazine Télé 7 Jours, “Violetta is a real woman. That makes a nice change!” The change was clearly successfully achieved: describing Dessay’s performance, the Financial Times wrote that “her theatrical impact is devastating”.

Sivadier’s production was staged in the open air, in Aix-en-Provence’s exquisite Théâtre de l'Archevêché with its huge spiral staircases, medieval arches and 18th-century wings. The stage décor was minimal, the simple costumes evoked the 1940s or 1950s, and the prime focus was on intense characterisation.

This is one of the most truthful and moving realisations of Verdi's La Traviata I could ever imagine...such is its intelligence in focusing on the essentials of the characters and the action that one is repeatedly knocked sideways...Dessay is exceptional throughout, not just physically but vocally; she realises Verdi's notes with insight as well as technical command. Charles Castronovo's impetuous, intensely vulnerable Alfredo is equally fine.

This turned out to be the most moving reading of Violetta I have ever seen. ..Argue about the 'sound' if you like, but there's no chance that you won't be touched by her overall performance. Charles Castronovo's Alfredo is just right: ardent, embarrassingly young and shy at the start, his tone warm and Italianate...Louis Langree's conducting is controversial; it's almost too classical...Both sound and picture are superb.

Dessay really rises to considerable histrionic heights and draws in the watcher to share in Violetta’s agonies of despair, brief hope and then despair again. Her total involvement blurs the odd moment of thin or unsteady tone...Castronovo as Alfredo sings with ardent lyricism and pleasing tone.

Her age and silvery voice may not in theory be suited to playing Violetta. But try believing that after Ah, fors’è lui or Addio, del passato, emotional pinnacles scaled with tremendous, tender subtlety. There’s also plenty to relish in the bloom and finesse of the London Symphony Orchestra