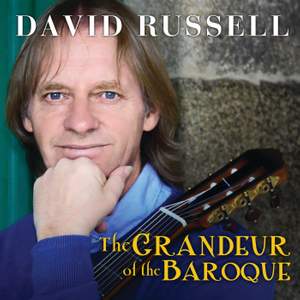 David Russell: The Grandeur of the Baroque

Musicians of David Russell's taste and experience are like connoisseurs...What you lose in reduction and transposition, you gain in tone colour, dynamic control and an intimacy that encourages... — Gramophone Magazine, June 2012 More…

Multi award winning guitarist David Russell’s latest recording for Telarc features a collection of some of his favourite music from the baroque repertoire including five pieces by J. S. Bach, and suites by Handel, Francois Couperin, and lutenist composer Silvius Weiss.

Winner of the 2005 Grammy award for best instrumental soloist, guitarist David Russell is internationally renowned for his superb musicianship and inspired artistry. Since 1995, he has recorded exclusively for Telarc International, with which he has recorded 17 CDs, among them the Grammy award winning Aire Latino. Named a Fellow of The Royal Academy of Music in London in 1997, Russell has also won the Medal of Honor from the Conservatory of the Balearics, along with numerous international competitions, including the Andrés Segovia Competition, the José Ramírez Competition and Spain's prestigious Francisco Tárrega Competition. Two of his recent Telarc CDs were named ‘Editor’s Choice’ by Gramophone.

The Partita No. 6 in E minor (BWV 830) is one of Bach’s most introspective keyboard compositions, with an unusual Toccata, here expanded to incorporate a vast fugue at its centre. Sinfonia No. 11 recalls the dignified 18th-century Sarabande, a style Russell has recorded in various forms throughout his discography. Handel’s Suite No. 7 is filled with references to French music, including an overture inspired by the work of Jean-Baptiste Lully. The French theme also lends itself well to Vingt-Sixième Ordre from Book IV of Couperin’s Pièces de Clavecin. The final selection on the CD is a suite by Weiss which has been part of David Russel’s repertoire for many years.

Musicians of David Russell's taste and experience are like connoisseurs...What you lose in reduction and transposition, you gain in tone colour, dynamic control and an intimacy that encourages a more ruthlessly efficient apporach to structural delineation....Overall? Playing that, unlike nature, could hardly be improved upon.