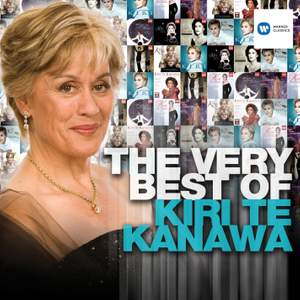 Kern: Cover Girl: Long Ago (and Far Away)

Berlin, I: They Say It's Wonderful (from Annie Get Your Gun)

Martin, Easthope: Come to the Fair

The glamorous soprano Kiri Te Kanawa was born in 1944 in Gisborne, on the east coast of the North Island of New Zealand. After winning a number of major vocal competitions in Australia, she came to London in 1966 to study singing at the London Opera Centre, where she trained for three years. Then in 1970 she was accepted by the Royal Opera at Covent Garden as a junior member of the company. Her big break came in 1971, when she was chosen to sing the Countess in a new production of Le nozze di Figaro.. It was something of a gamble for the Covent Garden management to cast an inexperienced singer in such an important role, but on the opening night Kiri’s performance stole the show.

After the Covent Garden Nozze di Figaro, an international career was assured. With a carefully chosen repertoire that included the principal soprano roles of Mozart, as well as a number of Verdi, Puccini and Richard Strauss heroines, Kiri went on to triumph in the major opera houses of the world. She first appeared at the Salzburg Festival in 1979 and became a regular and much-loved performer at Glyndebourne, a venue for which she has a particularly strong affection, and in 1981 Kiri was chosen to sing at the wedding of Prince Charles and Lady Diana Spencer in St Paul's Cathedral, an event seen by a world-wide television audience estimated at more than 600 million people

Not surprisingly, her vibrant but creamy voice, together with her attractive stage presence, made her an ideal interpreter of the main Richard Strauss roles, and it was not long before she was singing the Marschallin in Der Rosenkavalier, a part with which she scored a particular success. After a number of popular Italian and French arias, Kiriis heard in this programme in the Marschallin's Act I monologue, 'Da geht er hin', as well as in arias from several other German operas, including Wagner's Tannhäuser, Der Freischutz by Weber and Korngold's unjustly neglected romantic masterpiece Die tote Stadt. As a brief reminder of Kiri's achievements on the concert stage, the first CD closes with three orchestral songs by the French composers Ravel and Duparc, all of which show off the lustrous beauty of her voice to full advantage.

In addition to opera and so-called serious music however, Kiri is also a great enthusiast for the lighter repertoire, including folk music and the songs of Broadway and Tin Pan Alley. When performing this material, she uses the warm, lower part of her rich voice to give idiomatic performances of songs by some of America's greatest composers of popular music, such as George Gershwin, Jerome Kern, Irving Berlin and Cole Porter. Also heard here are Franz Gruber's familiar Christmas carol 'Silent Night' and a number of traditional British folk songs. These are followed by two Maori songs, in which Kiri is joined by a group of Maori singers and a number of specialist musicians who together capture the authentic style of these fascinating pieces.