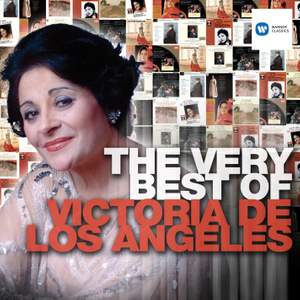 Victoria de los Angeles was born in Barcelona on 1 November 1923 into a musical family. She studied piano, guitar and singing at home, then at the Barcelona Conservatory. Her opera debut was as Mimì in La bohème, at Barcelona in 1941 and thereafter she quickly gained international fame. She was an artist who brought individuality and a sense of joy to everything she performed, so that the sense of expectation before her every appearance was fulfilled by the occasion itself.

Much of her charm and ease of communication derived from her Spanish background. The dark-hued good looks married to the warm, Mediterranean tints in her voice were indelibly – while at the same time almost imperceptibly – imprinted on the hearts and minds of her audiences. She had an instinctive ability to entrance the listener, which she undoubtedly did, by virtue of the natural quality of her art: something an artist is born with and cannot be learnt. At the same time, she had the technique and clarity of utterance that ensured an effortless communication with her audience.

This programme covers many of de los Angeles’s greatest stage roles including Mimì (La bohème), Cio- Cio-San (Madama Butterfly), Manon in Massenet’s opera of the same name and Wagner’s Elisabeth (Tannhäuser) and Elsa (Lohengrin), both of which she sang with great success at the start of her career. It also includes examples of her expertise in German and French songs, to which she always brought her own special charm.

However delightful her performance of non-Spanish repertory, it was de los Angeles’s interpretation of songs from her homeland that her audiences most eagerly awaited. Here her interpretations of Falla’s Amor brujo, the Montsalvatge negro songs – always treasurable in her live recitals – Valverde’s irresistible ‘Clavelitos!’ and two rousing songs by Nin are definitive. Add to that ‘Adios, Granada’, sung to her own guitar (an almost invariable encore), and the ‘Zapateado’ recorded at a memorable New York recital in 1972 with her compatriot Alicia de Larrocha, and this engrossing representation of a great singer’s art is complete.