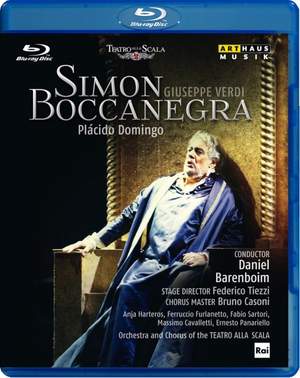 Some signs of vocal wear ([Domingo] was 69 at the time) could be seen as fitting the character; in fact they're surprisingly few and far between...The finest vocal contribution comes from soprano... — BBC Music Magazine, April 2012, 3 out of 5 stars More…

Plácido Domingo‘s triumphant “return” to his baritone roots (his first debut with the Mexican National Opera, in 1959, was as a baritone), is captured in this stunning DVD of the Teatro alla Scala’s 2010 production of Verdi’s Simon Boccanegra.

Plácido Domingo’s intention had been to bring down the curtain on his career in the (baritone) role of Simon Boccanegra. One can only hope – for our sake as well as his – that this truly great tenor of the modern era reneges on his promise and remains a unique vocal and dramatic presence on the opera stage long after the 70th birthday celebrations that were held in his honour on 21 January 2011.

Some signs of vocal wear ([Domingo] was 69 at the time) could be seen as fitting the character; in fact they're surprisingly few and far between...The finest vocal contribution comes from soprano Anja Harteros: as Amelia she sings with radiant tone and an effortless command of the role's difficulties...Barenboim stresses the score's sombre tones and gives it momentum

[Barenboim] delivers the kind of eloquently moulded, dramatically succinct phrases heard in his Wagner performances of late...[His] status as a Verdian outsider - and the fresh insights that come with that - is a genuine drawing card.

Neither the solo and choral singing nor the orchestral playing is ever less than such a work deserves...Domingo, Furlanetto and Cavaletti particularly are every inch in their roles...[but] There is a lot of standing and singing at each other which means that only the most seasoned performers, Domingo and Furlanetto in particular, dare act expressively.