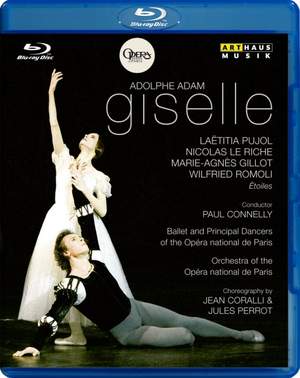 Arthaus presents Giselle, a classical ballet, which, with all its splendour and grace, is generally regarded as the apotheosis of the Romantic ballet.

The work premiered in the Salle de la rue Le Peletier at the Paris Opéra in 1841 and is considered the first major plot-based ballet to have survived to the modern day with its original choreography almost intact. In the course of the past century and a half Giselle has undergone only a few changes, e.g. by Marius Petipa, who revised the work for his 1887 production at the Maryinsky Theatre in St Petersburg.

The performance recorded on this DVD is based on the St Petersburg version and was choreographed by Patrice Bart and Eugène Polyakov, two out-and-out Petipa specialists. The scenery is the work of Alexandre Benois from 1924; originally designed for Diaghilev’s Ballets Russes, it heralded the re-emergence on Western programmes of the long absent Giselle and to this day it remains the benchmark for traditionalist stagings of this ballet.

The production was marked by an all-stars cast: Laëtitia Pujol dances the title role, combining her flawless technical skill with a fully developed sense of grace. Nicolas Le Riche, one of international ballet’s most respected stars, created her male counterpart, Albrecht, whose faithlessness drives her insane. Le Riche is famous all over the world for his elegant strength, the beauty of his expression and the musicality of his movements.