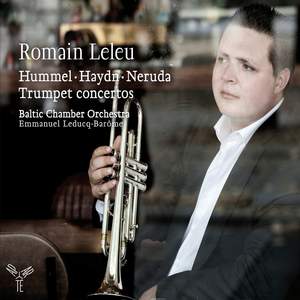 Concerto for Trumpet and Orchestra in E-Flat Major (cadenzas: Romain Leleu): I. Allegro

Romain Leleu is one of the most prominent proponents of the French school of trumpet. For his second release on Aparté, he has chosen to record the greatest concertos composed for trumpet and orchestra. He is accompanied by soloists from the St. Petersburg Philharmonic Orchestra working as the Baltic Chamber Orchestra.

This disc offers different cadenzas for the Haydn concerto written by Stockhausen, Penderecki (recorded for the first time) and Romain Leleu himself on CD.1.

The Stockhausen was written for the composer's son Markus and has been recorded only for Stockhausen Verlag, before. Penderecki, first wrote his cadenza for San José principal James Dooley but this was later revised to include the third movement as well as the first, in 2002, for Ole Edvard Antonen, and is delightfully wacky.