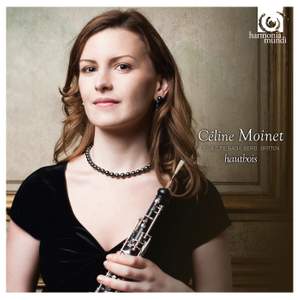 [Moinet] meets Berio's hair-raising demands and is positively swept along by the sheer gutsiness of Sequenza VII's trajectory. It's an exhilarating performance - edgy, audacious, fired up with... — BBC Music Magazine, June 2012, More…

In the orchestra, the oboe gives the tuning A on account of the richness of its harmonics and its stability, but it is also a solo instrument in its own right. Céline Moinet begins her collaboration with harmonia mundi with a veritable tour de force, combining in her programme repertoire separated by more than 200 years. Hence JS and CPE Bach resonate with the 20th century of Benjamin Britten, Luciano Berio and Elliott Carter, in a project that combines exceptional musical coherence with gentle sonority.

Born in Lille in 1984, Céline Moinet studied oboe and chamber music at the Paris Conservatoire in the classes of David Walter and Maurice Bourgue. She also studied the Baroque oboe with Marcel Ponseele and Xenia Löffler. In 2004 and 2005 she completed her orchestral training as a member of the Gustav Mahler Jugendorchester under the direction of Claudio Abbado. After this experience, she was invited to appear as guest principal with leading German orchestras and since June 2008 she has been the principal oboe of the celebrated Staatskapelle Dresden. In the autumn of 2011, she was invited by the Vienna Philharmonic Orchestra to appear on an extended tour of Asia and Australia. Céline Moinet performs regularly in solo and chamber repertoire and at the invitation of Fabio Luisi, she has given recitals and masterclasses at the Pacific Music Festival in Sapporo. Céline Moinet plays an oboe by Marigaux of Paris.

[Moinet] meets Berio's hair-raising demands and is positively swept along by the sheer gutsiness of Sequenza VII's trajectory. It's an exhilarating performance - edgy, audacious, fired up with virtuosic bravado - and the multiphonics are breathtaking.

[the Bachs' works] were composed for the flute, and though the works transfer easily enough, there is something slightly laboured in the results...In the modern works, which also include Elliott Carter's 1992 Inner Song, she's more convincing, fluent in the Metamorphoses, with their elegantly chiselled melodic lines, suitably capricious in the Sequenza