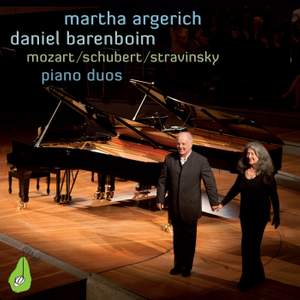 Part 1: The Adoration Of The Earth

A magic moment in the history of classical music: Martha Argerich and Daniel Barenboim – both from Buenos Aires – team up for a duo recital at Berlin's Philharmonie.

A reunion of the two classical superstars after more than 15 years.

“Stravinsky originally wrote the Rite of Spring in a two-piano version and one of the first performances was given privately by the composer and Claude Debussy. […] Argerich and Barenboim […] surely possessed even better technique than Stravinsky and Debussy and their commitment could hardly be exaggerated”. (The Guardian)

Who had the incendiary idea of bringing together two such combustible musicians? Their Mozart is absorbing, their Schubert richly imaginative.
But it is their Stravinsky...that is really breathtaking, a fusion of two wildly individual artistic minds who take the music and themselves to their limits.

Barenboim's instinct is to sing out, to play to the very back of the hall...[Argerich] acts in a way as a moderating influence on Barenboim's flights, thanks surely in part to her years of experience as a chamber musician...These two-piano bodges always draw from critics the cliche that one misses the orchestral colouring of the work...This shattering performance sweeps away all such notions.

There are few experiences in musical terms that are more satisfying than hearing performances of works you think you know in a way that makes you stop in your tracks. You submit to a new appraisal as it reveals aspects and nuances that you had been unaware of before. That is certainly what happened when I listened to this disc.

This is proper seat-of-your-pants, roller-coaster stuff: it’s a live recording, and you really feel that palpable sense of excitement and adrenaline, which is hardly surprising given the amount of notes they have to play! It truly is a stunning example of amazing pianistic feats, and I recommend it very highly indeed.

If The Rite of Spring is now so familiar that it has lost its notorious shock value, listen to this performance of Stravinsky’s four-hand arrangement, recorded live in Berlin in April. The very absence of the music’s spectacular orchestral colours brings out the audacity and violence of its assault on traditional harmony and rhythm.

This is sensational: two of the world’s greatest pianists coming together for a seemingly spontaneous joint recital that hits dizzy heights of excitement. Not everything is perfect...But can the adolescents’ dance ever have sounded more eloquent than under Barenboim’s fingers, or the spring rounds more hypnotic than Argerich makes them?

the audio experience has its own fire and majesty as these two old friends pitch in and strike sparks...an electrifying live recording.

If there is one disc any pianophile should not miss, it is this one...even the quieter moments possess great power…[this recording] delivers everything it promises and more.