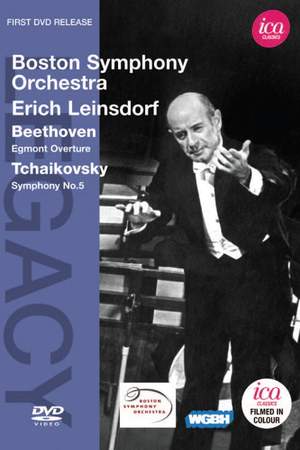 A hard-driven but very exciting Tchaikovsky Symphony No. 5 and Beethoven's Egmont from 1969 is countered by a delightful, stylish Mozart's Posthorn Serenade. — BBC Music Magazine, May 2012, 4 out of 5 stars More…

This series of DVDs will make the publicly broadcast BSO concerts from this era available for the first time since they were broadcast. This rare material represents some of the earliest televised concerts with the Boston Symphony and Erich Leinsdorf, and has been restored using the greatest care and state-of-the-art techniques. It is of exceptional musical interest and historic value.

This 1969 performance of Tchaikovsky’s Fifth Symphony has been the object of some attention from internet bloggers, with one site featuring an almost complete audio recording of the performance. Readers were astonished at the intensity and drive behind Leinsdorf’s interpretation.

Because he didn’t perform the work regularly (on only 14 occasions with the BSO) the performance is fresh and insightful – the emotional commitment is great both from Leinsdorf and the Boston Symphony Orchestra, which Richard Dyer describes as ‘solid, flexible and brilliant’.

All three featured works are new to Leinsdorf’s discography.

Two of ICA’s BSO DVDs featuring Charles Munch as conductor have been awarded the Diapason d’Or in France’s Diapason magazine.

A hard-driven but very exciting Tchaikovsky Symphony No. 5 and Beethoven's Egmont from 1969 is countered by a delightful, stylish Mozart's Posthorn Serenade.

The standard of playing is little short of sensational and Leinsdorf's actual interpretation...possesses prodigious energy, drama and sweep. Granted, the maestro's disconcertingly exaggerated podium manner takes some getting used to, but his authority is never in doubt. The closing pages shoot off like a rocket, Leinsdorf's audible exhortations merely intensifying the giddy rush of adrenaline.