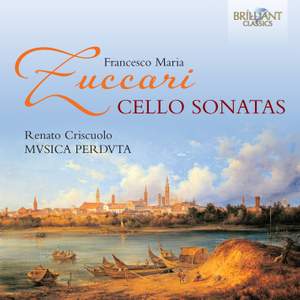 Zuccari: Cello Sonata No. 4 in A Minor

A name that will be unfamiliar to many listeners, Francesco Maria Zuccari was born circa 1694 in Dosolo, Italy.

The earliest trace of his work as a composer is from 1718, when he was working at the basilica of Assisi, becoming first organist there and later maestro di capella until 1727. He subsequently worked in senior posts in the cities of Rome and Padua, and died in 1788. Zuccari was primarily a church composer, so the ten Cello Sonatas heard on this new recording are a more unusual part of his output and have only recently been confirmed as his works.

The pieces are found in an anonymous 18th-century manuscript housed in the Sacro Conveno library in Assisi; after a day of research, MVSICA PERDVTA were able to attribute them to Zuccari. In recording these sonatas, MVSICA PERDVTA have paid considerable attention to the performance practices of Zuccari’s era.

Original period instruments, or accurate copies, were used, and the proper assembly and performance techniques of the instruments were observed, making this release a fascinating and authoritative exploration of rare but exciting repertoire.

The players of Musica Perduta are Italian musicians who play Baroque string instruments that are scrupulously restored in respect of original style bridges, fingerboards, bass bars, gut strings and tailpieces...this is an enterprising and skilful recording that should be of considerable interest to lovers of the cello and late-Baroque chamber music generally.