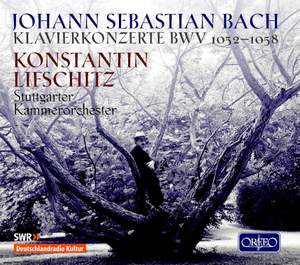 Konstantin Lifschitz has long since established himself as an outstanding exponent of the works of Johann Sebastian Bach. He has already recorded the ‘Musical Offering’ and the ‘Art of Fugue’ for ORFEO and now turns his attention to the composer’s seven keyboard concertos. He is partnered by the Stuttgart Chamber Orchestra, an ensemble that enjoys an equally distinguished reputation for its Bach interpretations. With only three of these seven concertos has it been possible to identify specific originals with different solo instruments, while the other four have been ascribed to various other instruments by experts in the field; attributions that none the less continue to be hotly debated. Lifschitz has at his command exactly the sort of touch and playful cunning needed to free the piano from its function as a continuo instrument and turns the whole experience into something intensely vital. The fact that he plays these works on a modern concert grand is wholly convincing, not least because in Bach’s day instruments were evolving all the time and Bach himself was fond of experimentation in this, as in so many other areas. The cyclical overview provided by Konstantin Lifschitz and the Stuttgart Chamber Orchestra in the case of the present recordings allows us to appreciate the old and the new in a clear and compelling way.

his Bach-playing is infused with a truly recognisable and fascinating personality and, at best, a remarkable sustainability of line...Lifschitz harnesses himself to Bach's supreme voice-leading to guide his keen perception of dynamic possibility, texture and touch and, most of all, melodic intensity.