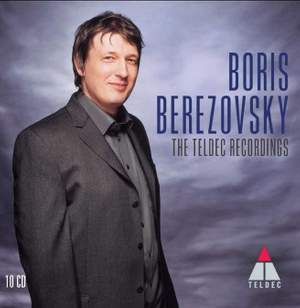 Mussorgsky: A Night on the Bare Mountain (piano version)

10CD boxed set collects all of Berezovsky’s recordings for both Teldec and Warner Classics.

Boris Berezovsky has established a great reputation, both as the most powerful of virtuoso pianists and as a musician gifted with a unique insight and a great sensitivity. He is regularly invited by the most prominent orchestras including the Royal Concertgebouw Orchestra, Frankfurt Radio Symphony Orchestra, Accademia Nazionale di Santa Cecilia (Rome), Danish National Radio Symphony Orchestra, Orchestre National de France and Philharmonia Orchestra (London). He will make his debut with the Berliner Philharmoniker in January 2012 With Teldec, Boris Berezovksy has recorded works of Chopin, Schumann, Rachmaninov, Mussorgsky, Balakirev, Medtner, Ravel and the complete Liszt Transcendental Studies. His recording of the Rachmaninov sonatas was awarded the Preis der Deutschen Schallplattenkritik and his Ravel disc was recommended by Le Monde de la Musique, Diapason, BBC Music Magazine and Independent on Sunday. Boris Berezovsky also won the BBC Music Magazine Awards in 2006.

In October 2004, still with Warner Classics International, the Berezovsky Trio recorded the Shostakovich Trio n°2 and Rachmaninov Trio Elégiaque n°2, which were awarded the Choc de la Musique in France, the Gramophone Award in the UK and the Echo Classic 2005 in Germany. His Solo live recording of the Chopin/Godowsky Etudes, released in January 2006, received the Diapason d'Or and the RTL d'Or.