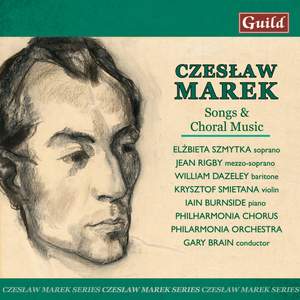 The Polish composer Czeslaw Marek (1891-1985) is one of the most highly-regarded of musicians in his native land but his music has been rarely heard outside of Poland. This unjust neglect of his splendid compositions is demonstrably shown to be wrong in this most important two-CD set of many of his major vocal compositions, newly recorded and featuring some of the most admired musicians of the day. The first CD offers a representative selection of Marek's important songs, and the second of his songs with orchestra and of several significant choral works, both with orchestra and unaccompanied. This issue demonstrates the quality of a fine composer's art in a manner which surely cannot be improved upon and will do much to establish him as a major figure in Polish music during the first half of the 20th-century and beyond. The recording quality is of the highest modern standard, as are the performances themselves.