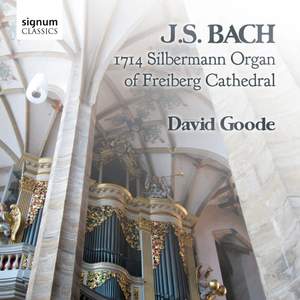 In the Adagio [BWV564], Goode brings a supple poise which is occasionally missing in the chorale preludes - though 'Vater unser' exudes a galant jauntiness. Best of all is the disc's crowning... — BBC Music Magazine, April 2012, 4 out of 5 stars More…

Bach, J S: Concerto in A minor (after Vivaldi)

David Goode performs a grand selection of some of Bach’s best organ works – including the famed Passacaglia and Fugue in C minor – providing modern listeners with a unique chance to hear Bach’s music as congregations of that period may have done.

The Gottfried Silbermann organ of Freiberg cathedral is one of a handful of such 18th-century instruments (built during Bach’s lifetime) to have remained largely unmodified to this day. Bach’s work as an organ inspector shows that he tested and inaugurated a number of Silbermann’s organs in Germany and, although there is no record that he played this instrument, its sound is undoubtedly one that Bach would have recognised and composed for.

In the Adagio [BWV564], Goode brings a supple poise which is occasionally missing in the chorale preludes - though 'Vater unser' exudes a galant jauntiness. Best of all is the disc's crowning glory: a blazing performance of the Passacaglia, turbo-charged with immediacy and penetrating lucidity. Goode and Silbermann make a formidable team.

It is obvious from the very opening of the Toccata, Adagio and Fugue that we are in the presence of a truly magnificent organ and an organist who has a real flair for interpreting Bach...Goode plays it all with the kind of all-encompassing virtuosity - hands, feet, registration and intellect - which is unique to the organ...far from being an excuse to hear Bach on a great historic organ, we hear Bach played with perception and real musical intelligence.

With performances, recording and quality of presentation about as good as they get, despite my slight preferences for other versions in some cases, and bearing in mind the most generous playing time, this would make an excellent introduction to JSB’s organ music and an excellent adjunct to any collection

As always on recordings of organ music, the instrument is important. Here, it’s the magnificent, and magnificently preserved, 1714 Silbermann organ at Freiberg Cathedral, its pitch maintained at just over a tone higher than modern concert pitch; its sound, as befits its maker’s name, gloriously silvery...Goode’s deftly articulated, beautifully registered playing emphasises clarity, structure and, above all, character.

Though this collection contains very fine performances of some of Bach's greatest organ works, the focus of the recording is as much on the instrument on which they are played as on David Goode's interpretations themselves...Goode certainly exploits [its] tonal weight and coherence in this recital

Bach played Silbermann’s instruments, so this world of sound — with its silvery mixtures, blazing reeds and characterful flutes — is authentic as well as utterly compelling in a cavernous acoustic...An exemplary introduction to some of Bach’s greatest organ works.