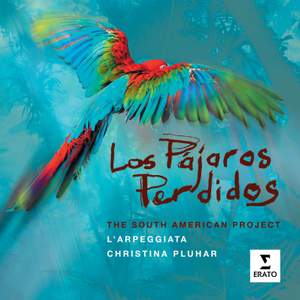 This may be a crossover disc, but it offers a fascinating fusion of early European and Latin American music, in what Pluhar, its director-theorbist, calls “South America’s living baroque”...If... — Sunday Times, 19th February 2012 More…

In a characteristically thrilling fusion of musical styles, L’Arpeggiata, the prizewinning ensemble led by harpist Christina Pluhar, presents a programme of Spanish and Latin American music that ranges from the 17th century to the present day. Guest vocalists include French countertenor Philippe Jaroussky, who sings the lyrical title tango, ‘Lost Birds’ by Ástor Piazzolla.

A thrilling and arresting fusion of musical styles and techniques is a trademark of L’Arpeggiata, the multi-faceted instrumental and vocal ensemble led by Christina Pluhar. This new collection – which takes its name, ‘Los Pájaros perdidos’ (‘the lost birds’), from a piece by the King of Tango, Ástor Piazzolla – brings a heady Latin American mix. Echoes from the pre-Columbian era, African rhythms and the styles and structures of the European Baroque all enrich this survey of music from the 17th century to the present day, with a geographical spread that covers Spain, Argentina, Chile, Paraguay and Venezuela.

The ensemble offers an array of exotic stringed instruments: the arpa llanera (a harp with a distinctive tinkling, airy sound); cuatro (a form of small, four-stringed guitar); bandolin (a kind of 15-stringed mandolin); jarana (an eight-stringed guitar); requinto (a high-pitched guitar), and charango (a small Andean guitar originally constructed from an armadillo shell). They are complemented by percussion, trumpet and clarinet, while the vocal parts are taken by French countertenor Philippe Jaroussky and Italian vocalist Lucilla Galeazzi (who both featured on L’Arpeggiata’s 2010 Mediterranean-themed album Via Crucis), the mezzo soprano Luciana Mancini (heard on L’Arpeggiata’s recording of the Monteverdi Vespers, receipient of Germany’s prestigious Echo award in 2011), the Spanish soprano Raquel Andueza and the Neapolitan-trained ballet dancer-turned-singer Vincenzo Capezzuto, who brings his haunting alto tones to several numbers. There are virtuosic guest instrumentalists too: Raul Orellana, on the charango, the Paraguayan harpist Lincoln Almada, and the Argentinian guitarist Quito Gato.

The title track is a lyrical tango, with a klezmer-like clarinet curling round Jaroussky’s vocal line, while the many other striking number include: the lively Pájarillo Verde from Venezuela, which will please fans of the Buena Vista Social Club; the melancholy Alfonsina y el Mar, sung by Lucilla Galeazzi; the haunting La embarazada del viento, with a powerful performance from Luciana Mancini; the sensual, purely instrumental Caballo Viejo and a version of the well-known bolero Besame mucho, with soprano Raquel Andueza, that is reminiscent of some of Peggy Lee’s sexier recordings.

This may be a crossover disc, but it offers a fascinating fusion of early European and Latin American music, in what Pluhar, its director-theorbist, calls “South America’s living baroque”...If Philippe Jaroussky sounds out of place, the earthy, sensual vocalists Lucilla Galeazzi and Luciana Mancini are the real deal.