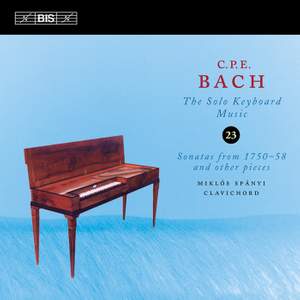 In his acclaimed series of C.P.E. Bach's music for solo keyboard, Miklós Spányi has constructed a programme consisting of four sonatas from the 1750's, including the closing Sonata in A major (Wq65/32).

The sonatas are interspersed with a number of shorter pieces: Solfeggios and Fantasias composed mainly to be used in the teaching of Bach's own students.

Particularly interesting is the Fantasia in D major, Wq117/14, an example of Bach's ‘free fantasias’ which is completely unmeasured, requiring the performer to devise his or her own appropriate rhythm in the style of an improvisation.

Of his most recent disc in the series, International Record Review wrote 'Anyone expecting a chaste, Dresden-china simplicity is in for a culture schock as Spányi probes beneath the surface of Bach's highly articulate musical surfaces with a temporal plasticity that creates the impression of living, breathing musical organisms.'

Vol. 23 is a veritable box of delights...We can revel in the sheer variety of JSB's most outlandish son, with music from the frankly weird to the exultantly brilliant.