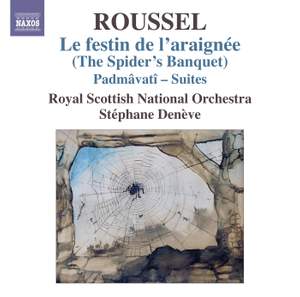 This is a nicely crafted account from Deneve, with plenty of detail in the characterisation of the various bugs and insects depicted by the score...And it has a considerable bonus in being partnered... — BBC Music Magazine, February 2012, More…

One of Roussel’s most performed orchestral works, The Spider’s Banquet was composed during his earlier impressionistic period, and depicts the beauty and violence of insect life in a garden. Roussel’s experiences as a lieutenant in the French Navy first introduced him to Eastern influences, and the ‘opera-ballet’ Padmâvatî was inspired by his later visit to the ancient city of Chittor in Rajasthan state of western India. It uses aspects of Indian music to evoke this city’s legendary siege by the Mongols. This is the fifth and final volume in Stéphane Denève and the RSNO’s acclaimed survey of Roussel’s orchestral works.

This is a nicely crafted account from Deneve, with plenty of detail in the characterisation of the various bugs and insects depicted by the score...And it has a considerable bonus in being partnered on this disc by the two rarely heard Suites from Roussel's Indian-inspired opera Padmavati...It is wonderful to hear the Suites in such stylish performances.

The music [of The Spider's Feast], which is couched in Roussel's own brand of impressionism, is radiantly orchestrated and, through its descriptive powers, holds its own without the visual elements that a staged performance would provide.

Roussel is masterly at creating an entomological world...Certainly this finely judged, beautifully played performance - blessed with clear and immediate sound - is the bee's knees (apologies!), which demonstrates much painstaiking work on the musicians' part to bring expressive meaning and clarity of scoring to such charming, imaginative and skilled music.

Denève handles [The Spider's Banquet] with great subtlety and refinement, the woodwind detail crisply defined against the veils of strings...In performance, [Padmâvatî] is problematic, but the dance interludes are arguably its best moments, and Denève and his orchestra present them very convincingly.

Both [works] are given vibrant life by the RSNO and Denève, with plenty of graphic detail deriving from Roussel’s skilful musical depiction of everyday war and peace in the insect world.

This disc completes [the RSNO's] invaluable five-album survey of Albert Roussel, a contemporary of Debussy and Ravel...Another rehearsal or two might have benefited the strings, but overall these are idiomatic, genial performances of attractive and unfairly neglected early 20th-century repertoire.