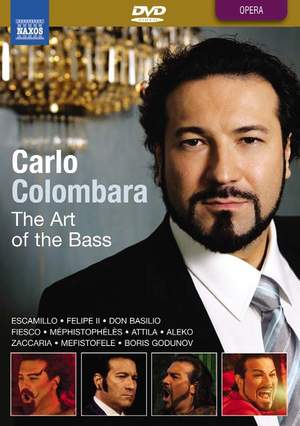 Carlo Colombara: The Art of the Bass

Described as “the great Verdian bass” (Le Figaro) and a “Mefistofele who stood out over all the others” (Der Neue Merker), Carlo Colombara brings some of the most famous bass rôles to life in this wide-ranging programme. Emotions range from the pride of Escamillo in Bizet’s Carmen, through the terrors of Verdi’s Attila, to the tender recollections of Rachmaninov’s Aleko. Mephistopheles strides powerfully through both Gounod and Boito’s operas, and Rossini’s comic wit contrasts with the darkness of Mussorgsky’s Boris Godunov.

In 1986 he won the prize for the best Italian singer in the G. B. Viotti Competition and the following year he won the As.Li.Co competition before making his début at the Teatro dell’Opera in Rome in Ernani. His subsequent career has brought appearances in the most important theatres of the world, in Tokyo, London, Berlin, Vienna, Milan, New York, Zurich, Barcelona, where he now lives, Verona and elsewhere.