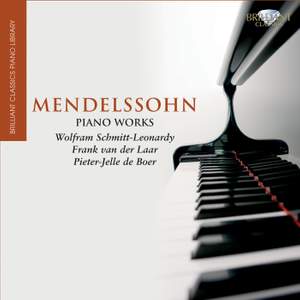 Mendelssohn: Scherzo in B minor

Felix Mendelssohn was a virtuoso pianist, and it is worth remembering that he was born in 1809, with his friend Schumann being born a year later in 1810, as was Chopin, and Liszt following in 1811. These composers were among the greatest pianists of the 19th century, and they were born at a time when the piano was a relatively modern instrument, and composers such as Hummel, Moscheles (Mendelssohn’s friend), Kalkbrenner and Ries were accorded adulation similar to pop stars today. Beethoven commenced his career in the 1790s as a virtuoso pianist.

No surprise then that the young Mendelssohn composed extensively for his chosen instrument from the outset. From early concertos and sonatas he quickly established his ‘mature’ style in works such as the Rondo capriccioso, and the Andante cantabile e Presto agitato.

The masterpieces that followed include the remarkably imposing Variations serieuses and the famous Songs without Words. Mendelssohn’s style did not change throughout his short creative life – he very quickly composed in what we know as his mature style from his early teens, something even Mozart didn’t achieve. This 4CD contains the Songs without Words, Variations serieuse, Kinderstucke, Rondo capriccioso, Capriccio, and Trois Fantasies ou Caprices plus several shorter works.