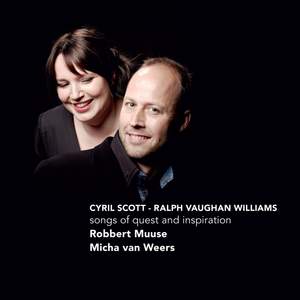 This is worth exploring for the 13 Cyril Scott songs, some decorative, some adventurous, all fascinating and new to disc. — BBC Music Magazine, April 2012, 3 out of 5 stars More…

Whither must I wander

Bright is the ring of words

I have trod the upward and the downward slope

On this new CD the highly rated duo of baritone Robbert Muuse and pianist Micha van Weers perform a selection of rarely recorded songs by the underrated 20th century English composer Cyril Scott. Several of these are here being recorded for the first time. The disc also includes Vaughan Williams “Songs of Travel” and two of his “Five Mystical Songs”.

Dutch baritone Robbert Muuse has performed in concert halls throughout Europe, the U.S.A. and in Israel, and worked with conductors Paul Goodwin, Christoph Poppen, Jan Willem de Vriend, and Jos van Veldhoven, amongst others. He has appeared on several CDs and DVDs, international radio and television. Robbert Muuse takes a special interest in the song repertoire and is half of a long running musical partnership with pianist Micha van Weers.

Micha van Weers was also born in the Netherlands and has won several awards, including the MeesPierson Award at the Amsterdam Concertgebouw as a duo with baritone Robbert Muuse. She has been working with Robbert Muuse since they first met in 1994, and besides the standard repertoire they are always looking to explore the rare, forgotten, or even forbidden songs that they deem worthy to be re-discovered and performed. This research led them to the songs by Cyril Scott that have unjustly remained unknown to our generation.

A prolific composer, Cyril Scott wrote some four hundred works including four Symphonies, three Operas, several concertos, overtures, and tone poems, many Chamber works, and innumerable songs. Much of his music is rarely heard including the 13 songs performed on this new CD, several of which are here receiving their world premier recordings.

This is worth exploring for the 13 Cyril Scott songs, some decorative, some adventurous, all fascinating and new to disc.

an enlightening glimpse of the composer's appreciable powers