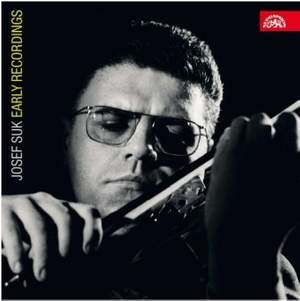 Smetana: From the Homeland - two duos for violin and piano

On the morning on 7 July 2011 the agencies brought the sad news that one of the legends of 20th century music had passed away. Josef Suk ranks among the most accomplished violinists of the epoch. When he launched his artistic career, he was gifted with unquestionable talent but also felt the obligation to meet the enormous general expectations (he was, after all, the grandson of the composer Josef Suk and great grandson of the maestro Antonin Dvořak!).

Back in the mid-1950s he won international recognition – and began recording too. The presented recordings, most of them on CD for the very first time, date from 1956-1967 and introduce Josef Suk as a mature artist with a distinct interpretational approach and a beautiful, characteristic tone. Within a short time, he recorded, primarily with pianists (Holeček, Panenka, Hala), a remarkably extensive repertoire, ranging from pieces by his beloved Dvořak and Suk (to whom he would repeatedly return) to sonatas by Debussy and Janaček (for which he received a Grand Prix du Disque de l’Academie Charles Cros), as well as duos by Kodaly and Honegger with the cellist Andre Navarra.

These carefully remastered recordings serve as a historical document and, above all, bear witness to the art of a superlative young musician whose name would later on be spoken of in the same breath as other legends. Josef Suk’s early recordings – previously unreleased and bearing witness to the legendary 20th-century violinist’s mastery.