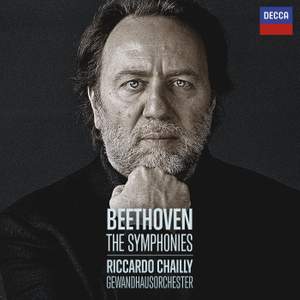 Readings focused entirely on the composer, not on debating how things ‘should’ sound...The playing is responsive and immaculate throughout, forming the backbone of Chailly’s brilliantly authentic... — Daniel Ross, bbc.co.uk, 26th October 2011 More…

Recording of the Week, Beethoven Symphonies from Thielemann and Chailly

This complete cycle of Beethoven’s nine Symphonies is a landmark event for Decca, for Maestro Chailly, and for the Gewandhausorchester, where he has been Kapellmeister since 2005.

These acclaimed performances were recorded live in the Gewandhaus over the last three years, in preparation for the highly-anticipated complete cycles that Maestro Chailly and the orchestra will give in several major European cities in October and November 2011 – performances which will provide the platform for launching these important new recordings.

The cycle showcases the finesse and musicality of the legendary Gewandhaus Orchestra − from the Haydnesque elegance of the first two symphonies, to the grandeur and drama of the choral Ninth Symphony.

Readings focused entirely on the composer, not on debating how things ‘should’ sound...The playing is responsive and immaculate throughout, forming the backbone of Chailly’s brilliantly authentic crib-sheet of a symphony cycle.

Chailly's first recorded Beethoven cycle shows him to be a Classicist through and through...There is also a lovely Italianate cantabile which period strings would find it impossible (and possibly undesirable) to match...The recordings, I should add, are superb...There is space around the sound, as there needs to be in Beethoven, complemented by an immediacy and clarity of detail that derives in large measure from the playing itself.

Chailly is direct, fiery, full of vitality and detail...[he] simply convinces me...To hear the Leipzig Gewandhaus Orchestra on stupendous form in these masterpieces is a privilege, and one that's hard to resist given the blazing power and conviction of Chailly's vision.

there’s no doubting the lightness and freshness that these speeds bring to the music, as well as virtuoso playing from the orchestra...Something I kept noticing was how he brings out the rhythmic lines of the horns and trumpets, giving his interpretation a real sense of drive, and I delighted in picking up on little details I had not heard before.

His Beethoven represents a confrontation of tradition...with innovative ideas...From the outset, it is clear that Chailly’s Beethoven will be an exhilarating adventure: closely observing the once-controversial metronome markings, he conducts the fast movements of the C and D major symphonies with Haydnesque wit and brio...The breathtaking finale of No 8 is the most exciting I have heard on disc.

This is above all, an explosively swift cycle. Chailly is utterly faithful to Beethoven's metronome markings...but the tautness of the playing, the definition of its detail – especially from the woodwind – and the phenomenal range of dynamics the Gewandhaus Orchestra has at its command mean that weight and drama are always available to Chailly...The result is a Beethoven cycle that's up there with the best modern-orchestra versions of recent times

they play as if possessed: Chailly has opted to stick faithfully to the composer's original tempos. The effect is revelatory: even old warhorses such as the 5th Symphony are transformed into galloping racehorses, in thoroughbred performances befitting the pedigree of the material, restoring a dash and brio to works whose revolutionary aspects can once again be clearly glimpsed.

Chailly injects a colossal and thrilling urgency into the music...This is a remarkable feat, which owes much to the fabulous unanimity of the Leipzig players. Many orchestras would stumble over the finale of the Second Symphony, if taken at Chailly’s breakneck speed, but this one sails through unscathed.

There is a monumentality and gravitas in these new Decca recordings, released to tie in with Chailly’s Barbican residency...You really do get the best of both worlds here – clear textures and sharp articulation to rival those of Krivine’s recent period cycle, paired with orchestral textures rich and characterful.