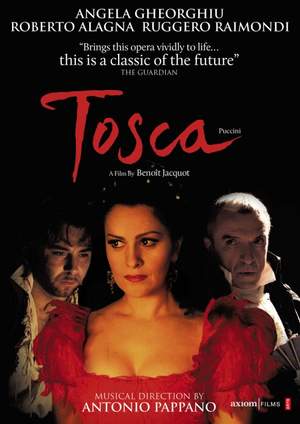 Chorus and Orchestra of the...

Tosca: it is opera, it is Italy. It is desire, passion and murder….

Prestige of official selection at Venice Film Festival, a comprehensive and successful commercial run in cinemas and outstanding critical acclaim.

10th anniversary special edition, with exclusive DVD bonus features including a new 10th anniversary interview with soprano Angela Gheorghiu, a collector’s booklet and a “Costume Design” featurette plus original 2001 interviews with Angela Gheorghiu on her role as Tosca, director Benoît Jacquot on creating Tosca as film and Antonio Pappano on Puccini’s music for the opera.

"Gheorghiu gives a performance that cuts to the core of Puccini's tragedy... Pappano's conducting; a rich reading that conjures the ideal mixture of syrup and bitterness" Independent on Sunday

Chorus and Orchestra of the Royal Opera House, Antonio Pappano