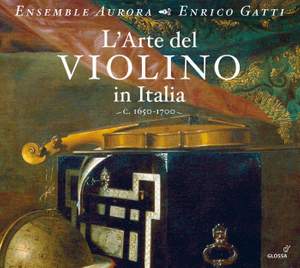 Sonate di violino a 1, 2, 3, 4 per chiesa and anco aggionta per camera, Op. 1: Sonata malinconica a solo

Gabrielli: Ricercare for Solo Cello No. 1

At the start of the 1990s, the Perugian violinist Enrico Gatti made a number of important recordings chronicling the development of the Italian violin schools across the later 17th century. Composer / violinists (such as Pandolfi Mealli, Cazzati, Uccellini, Vitali and Torelli and many more) developed new musical forms and techniques designed to show off the instrument and its capabilities.

Glossa is delighted to present two of those releases focusing on a golden age for Italian instrumental music, led by Gatti demonstrating his special qualities as a musician. Gatti’s refined approach to the interpretation of violin music remains a refreshing antidote to other more 'high velocity' styles. This pair of recordings, entitled 'L’Arte del Violino in Italia', shows the potential quality of Gatti’s later discs for Glossa, eg his sonatas by Antonio Vivaldi.

Taking part in this captivating exploration are members of Gatti’s long-standing Ensemble Aurora, which here include marvellous players such as harpsichordist Guido Morini and harpist Mara Galassi. Accompanying this new release, which breathes new life into 17th century violin repertoire, come two complementary essays on the subject written by Marc Vanscheeuwijck and Gatti himself.