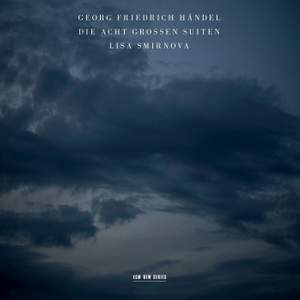 as Lisa Smirnova's vivacious account of the Eight Great Suites reminds us, they're a treasure-trove of Handelian wit and humanity. Purists will certainly need to take them on Smirnova's terms,... — BBC Music Magazine, January 2011, 5 out of 5 stars More…

Handel: Harpsichord Suite No. 5 in E HWV 430 "The Harmonious Blacksmith"

ECM New Series debut for the exceptional Russian-born pianist Lisa Smirnova, playing Handel’s Eight Great Suites (1720), also known as “The Eight London Suites” or “Suites de Pièces pour le Clavecin” – by any name, major pieces in the keyboard literature. Outstanding artists from Glenn Gould to Keith Jarrett have been drawn to these suites, but there are very few recordings of all eight, either on piano or harpsichord, currently on the market. Smirnova opts for the modern piano. She had been working rigorously on the Suites for five years prior to undertaking this recording, making many discoveries.

The 1720 edition of Suites – HWV 426-433 – is considered by many the most important collection of Handel’s early works. Published by the composer himself, it includes works from both his Hamburg and English periods, all extensively revised by the composer, right through the printing process.

Educated at Moscow’s Tchaikovsky Conservatory, the Salzburg Mozarteum, and with Maria Curcio and Robert Levin, Smirnova (born in Moscow, currently living in Austria) burst onto the classical scene in 1992 with a well-received debut at Carnegie Hall when she was only 20. In 1993, she received the Brahms Prize at the Schleswig-Holstein Music Festival, the first pianist ever to be honoured with this award, and her concert activities have extended to international concert podia in Europe, Asia and the USA. She has a long relationship with the Far East – since 2007 she has been Artistic Director of the Nagasaki-Ojika International Music Festival.

Smirnova’s repertoire extends across the centuries – she has collaborated with contemporary composers including Kancheli, Silvestrov and Rihm, and won international awards for her recordings of Bach on MDG. Other widely-praised recordings include her account of Bloch’s works for viola and piano with Daniel Raiskin, on BMG/Arte Nova.

as Lisa Smirnova's vivacious account of the Eight Great Suites reminds us, they're a treasure-trove of Handelian wit and humanity. Purists will certainly need to take them on Smirnova's terms, too. Although she engages with period practice...she's no slave to it, producing something unapologetically pianistic and sometimes anachronistic here...Handel with care? Undeniably. And with captivating flair in spades.

Handel's first set of London suites played on the piano, in the hands of Lisa Smirnova, are a resounding success. This is a performance of real artistry and is unspeakably beautiful at moments. If I had to pick out highlights - a difficult task - the E minor and F# minor suites are, for me, some of the best Handel playing I've heard.

this is a truly delightful couple of discs...for the sound picture not only allows the illusion of a harpsichord when appropriate (try the Prelude to Suite No. 1) but serves the clarity of rapid passagework extremely well...Smirnova's limpid touch and lucid tone are perfect partners for Handel and, with an excellent booklet, one can only look forward to Vol. 2.

Smirnova here performs the so-called "Eight London Suites" with great sensitivity and poise - the first movement of the Suite No. 2 opens with the most startlingly delicate of trills - and subtle differentiation between the various Gigues, Allemandes, Courantes and Sarabandes whose abundance reflects the suites' origins in contemporary dance forms.