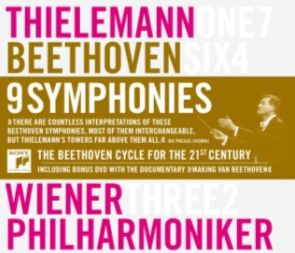 Thielemann is a musician who is not only conservative but thought-prokovingly original - and his performances will appeal to listeners who long for a return to interpretative values that are... — International Record Review, May 2012 More…

This striking hardcover booklet with slipcase houses 6 CDs containing Beethoven’s entire symphonic work as well as a Bonus DVD with the documentary “Making van Beethoven”. (Documentary on the recording process with interviews with Christian Thielemann and members of the orchestra.) Dubbed “The Beethoven Cycle of the 21st Century”, this cycle was recorded live in concert in the Goldener Saal of the Vienna Musikverein between 2008 and 2010 by the Vienna Philharmonic under the baton of Thielemann.

Thielemann is a musician who is not only conservative but thought-prokovingly original - and his performances will appeal to listeners who long for a return to interpretative values that are closer to the very individual Beethoven of Furtwangler or Mengelberg.

one of the most joyous, released and sheerly infectious accounts I have ever heard [of the Second], full of drive, impish wit and manic ecstasy. The orchestra is obviously having a high old time...Thielemann takes the orchestra’s famed sonority and builds on it. These are performances all of a piece; Thielemann has imposed his conception upon the cycle as a whole and the emphasis upon weight and grandeur without excluding excitement.

Perhaps the most controversial aspect of Thielemann’s approach is a more extreme deployment of rubato than is traditional...While it may be too much for some, it is always there for a reason: either to underline a dramatic moment or to highlight an important point in the structure of a movement.

Anyone who grew up with Herbert von Karajan, Karl Böhm or Eugen Jochum's recordings will feel at home in the musical world Thielemann creates...The Third, the Eroica, may be all bulging muscle and portentous climaxes, but it has a sense of purpose and dynamism that make it the most successful performance of the nine, just as the scale and scope of the Ninth is never in doubt.

Thielemann’s approach is defiantly old-school – tempi are expansive and disarmingly flexible, orchestral sonorities are huge, rich and fruity. Once your ears have adjusted, there’s an awful lot of music-making here which sounds undeniably magnificent. The brassy opening of the Fifth Symphony’s finale suggests that we’re entering Valhalla.