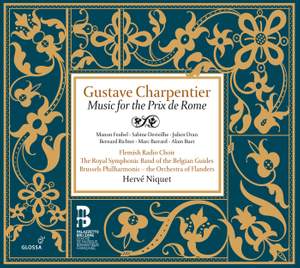 Two of the works here [Didon and La vie du Poete] pointed to a serious future for Charpentier in opera...the standard of performance under Herve Niquet and his chosen Belgian soloists and ensembles... — Gramophone Magazine, May 2012 More…

This third release in the Prix de Rome series by Glossa is set to demonstrate a composer whose range of talents far extends beyond his famous opera 'Louise'.

After Debussy and Saint-Saëns, Hervé Niquet now turns to the dramatic realism of the late 19th century. The Italian period in Charpentier’s life (1888-1890) was actually his most fruitful creative. It was there, in Rome, that he worked on two masterly symphonic works: the one elaborating his 'Impressions d’Italie' which was to enjoy significant success right up until the Second World War; whilst the other, 'La Vie du poète', more experimental, called for three soloists, a chorus and a large symphonic orchestra. Thanks to the quality of his chorus 'La Fête des myrtes' and the magnificent Wagnerian cantata 'Didon', the composer won, in 1887, the famous Prix de Rome, opening the way for him to have a Bohemian séjour in the Villa Medici.

Two of the works here [Didon and La vie du Poete] pointed to a serious future for Charpentier in opera...the standard of performance under Herve Niquet and his chosen Belgian soloists and ensembles easily crosses over from archive duty into committed championship. The Brussels and Antwerp recordings are most natural. A huge recommendation, especially for Didon.

The result is a kind of operatic symphony and some of the music is stunning...this performance is preferable to the 1934 performance by Charpentier. For a start, modern recording allows us to hear the considerable delights of the orchestration, and the orchestral playing and choral singing are superior too...there is so much lovely music here.