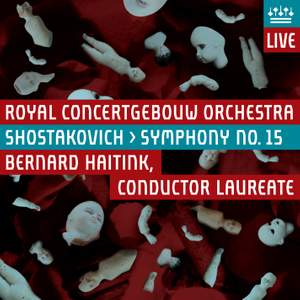 Haitink's supreme control of pacing [in the slow movement] ensures that all the pregnant silences in the music are imbued with a real sense of anxiety...Likewise Haitink's slow tempo in the main... — BBC Music Magazine, February 2012, 5 out of 5 stars More…

All concerts given by Bernard Haitink, in his capacity as honorary conductor of the Royal Concertgebouw Orchestra, are considered high points of the Amsterdam concert season.

In March 2010, Haitink made a guest appearance with the orchestra conducting a programme featuring Brahms’s Violin Concerto (with Frank Peter Zimmermann as soloist) and Dmitry Shostakovich’s Fifteenth Symphony. The entire concert was televised live and the audio recording of the Fifteenth Symphony is now presented here on this Super Audio CD release for the pleasure of music lovers everywhere.

In the widely acclaimed Shostakovich cycle realised by Haitink conducting the Concertgebouw Orchestra and the London Philharmonic Orchestra in the 1970s, the Fifteenth Symphony was recorded by the LPO. Now nearly 40 years later, the Royal Concertgebouw Orchestra, under the direction of its conductor laureate, is very proud indeed to add the present recording of Shostakovich’s swansong to its discography.

Haitink's supreme control of pacing [in the slow movement] ensures that all the pregnant silences in the music are imbued with a real sense of anxiety...Likewise Haitink's slow tempo in the main section of the finale pays dividends...Haitink eschews some of the grotesque character implied in the toyshop music of the first movement, but with the Royal Concertgebouw delivering sensationally taut playing, there is no obvious loss of impetus.

Haitink underplays the opportunities for grotesque humour and the sardonic edge to some of the writing, focusing instead on its genuinely symphonic breadth, the deep shadows and pregnant pauses. It’s gripping from start to finish, and the playing Haitink inspires is rarely short of stunning, vibrant with tension.

Haitink really gets beneath the skin of a work that, with quotes from Rossini and Wagner, must rank as one of the more “difficult”, and certainly the most enigmatic, of Shostakovich’s 15 symphonies. He captures the fake jokiness of the first movement without letting it sound frivolous, and traces a fine line between mysterious threnody and tragic might in the great Adagio.

What impresses, as in [Haitink's] recent Bruckner Fourth for LSO Live...is the formal cohesion and unforced gravitas of the music-making. His prestigious band is in fine fettle...The sound engineering of 2010 conveys the warmth, detail and ample resonance of the Concertgebouw even if certain instrumental solos are brought a little close

Haitink paces the initial alternation of brass chorales and cello soliloquys superbly...Few, if any, symphonic endings have conveyed such emotion through such economy of means - a quality Haitink conveys in considerable measure...This account surpasses what was already a highlight of Haitink's studio cycle.

This performance of Shostakovich’s final symphony testifies both to Bernard Haitink’s searching way of interpreting the Russian composer and to the orchestra’s ready appreciation of the emotional range that the Fifteenth embraces.