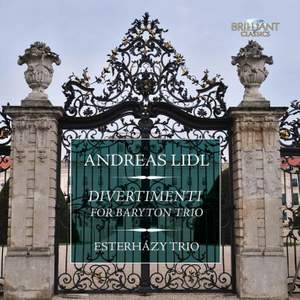 If you like Haydn's music for the baryton you will certainly enjoy these pieces. The Esterházy Trio explores their character to the full, with animated and technically immaculate performances. — MusicWeb International, December 2012 More…

Andreas Lidl, or Lidel as it is sometimes written, was a member of the court orchestra at Eszterháza, where Joseph Haydn was later to become Kapellmeister. A virtuoso player of the baryton, an instrument of the viola da gamba family, he did much to develop this unusual instrument, such as increasing the strings below the bridge to 27 to allow full chromatic accompaniment.

The baryton was particularly popular in Germany and Austria. Haydn composed over 200 works for it, largely as a result of his employer Prince Nikolaus Eszterhaza, who was a great enthusiast. Lidl’s virtuosity was frequently discussed by musical commentators of his era. Charles Burney mentioned the composer, in his General History of Music, as being an astonishing performer, playing with taste and refinement Lidl was a member of the Eszterháza orchestra from 1769 until 1774, and also worked in London for many years, where he eventually died. The music on this CD is typical of the light music composed for wealthy amateurs to play – skilfully written, and not without challenges for performers.

If you like Haydn's music for the baryton you will certainly enjoy these pieces. The Esterházy Trio explores their character to the full, with animated and technically immaculate performances.