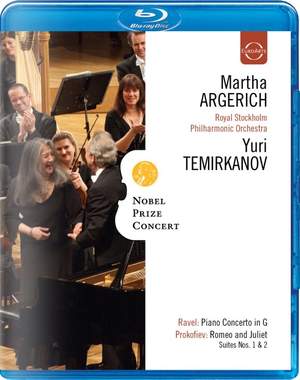 As part of the official Nobel Week, the world’s most renowned artists are gathering each year to pay tribute to the Nobel Laureates. An event of world class stature and performances of highest international standard. Members of the Swedish Royal Family as well as guests of the Nobel Foundation are attending the highly acclaimed event, which gathers internationally renowned artists and conductors each year.

Born in Buenos Aires in 1941, Martha Argerich had her performing debut at the age of eight. Her breakthrough came in 1965, when she won the prestigious Chopin Competition in Warsaw. Working with most of the world’s leading conductors Argerich is passionate about supporting young talents. In 1999 the first International Martha Argerich Piano Contest was held in Buenos Aires, a competition that she founded and of which she is now the chief judge.