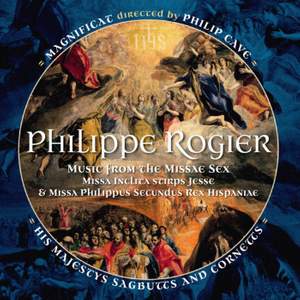 The Council of Trent would have been pleased: with just two voices per part, and with clear diction and articulation from the members of Magnificat, the texts are generally easy to follow. The... — BBC Music Magazine, March 2012, 5 out of 5 stars More…

This recording, the second celebrating the 450th anniversary of Rogier’s birth, is a new collection of premiere recordings by the Renaissance composer, including the Missa Philippus Secundus Rex Hispaniae and a selection of Iberian Polyphony.

Magnificat, who specialise in the restoration and performance of neglected choral masterpieces of the 16th and 17th centuries, received critical acclaim for its previous Rogier recording, which IRR described as “brilliantly realised” and “an excellent recording”.

The lush textures and colours for which Rogier is renowned are highlighted by the singers and musicians, which include His Majestys Sagbutts and Cornetts, in this historically-informed performance that is bursting with vitality and energy.

Directed by Philip Cave, Magnificat is one of the world’s premier vocal ensembles.

The Council of Trent would have been pleased: with just two voices per part, and with clear diction and articulation from the members of Magnificat, the texts are generally easy to follow. The lower voices are captured especially well, and the blend between the voices and His Majesty's Sagbutts and Cornetts is gorgeous.

I'm not sure what inspired Magnificat's director, Philip Cave, to fly the flag for Philippe Rogier but this recording vindicates his decision to do so.

This is a superb, vibrant disc of some first-rate music...The singers of Magnificat have a rich, creamy sound, well blended but with each voice part's individuality also fully audible. They also have an excellent sense of line, particularly valuable in Rogier's dense writing