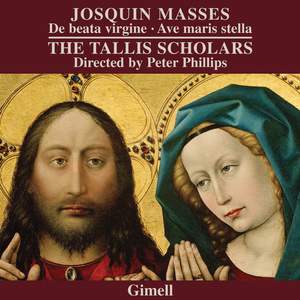 the complex cross-rhythms in the Credo are adroitly handled. Although the performance is a semitone lower than modern pitch, movements such as the Gloria keep their brightness...You can hear... — BBC Music Magazine, December 2011, 4 out of 5 stars More…

The Tallis Scholars have been performing the music of Josquin regularly in concert for nearly 25 years.

Their 1986 CD of the Missa Pange lingua was the first recording of Early Music to win the Gramophone Record of the Year Award and their 2009 CD of the Missa Malheur me bat was nominated for a Grammy.

This new release is the fifth CD in The Tallis Scholars’ projected Complete Josquin Mass Cycle.

the complex cross-rhythms in the Credo are adroitly handled. Although the performance is a semitone lower than modern pitch, movements such as the Gloria keep their brightness...You can hear their enthusiasm in the exultant finish of the Gloria and the sublime melodic meditations in the Sanctus and Agnus [of the Ave Maris Stella Mass].

The recorded sound is up close and personal, putting you right inside the music...An essential buy from a team who never put a note wrong. Excellent, informative booklet-notes too.

theirs is a performance one wants to listen to many times...For my own part I'm happy to live with the women's voices (I mean: what voices!) and a certain sameness in the interpretations for the absolute clarity, the absolute efficiency, the certainty that nobody is messing around with you. These are authoritative performances that can stand the test of time.

The Tallis Scholars here achieve an extraordinary clarity of diction, line and texure that leans more towards explication rather than expression. That they get away with it is down to a sophisticated sense of word-painting that grows as much out of the tensions created by the complexity of the music as the meaning of the texts.

Marking the midpoint of the Tallis Scholars’ complete projected Josquin cycle, the two works here, based on plainchants, are masterpieces both...For those who revel in structural listening, Phillips and his charges provide readings of remarkable textural clarity. But they also sing with supercharged expression.

the provenance of the two great works here, the Missa De Beata Virgine and Missa Ave Maris Stella, both canonically intricate and based on plainchant, is secure ...There are moments when the Tallis Scholars' beautifully shaped performances seem almost too seraphic, too smooth, but that's a minor quibble.

Both, though stylistically contrasting, use chant melody with elaborate canons and mathematical schemes. This exceptional ensemble makes it sound effortless, with impeccable tuning and evenness of tone. Peter Phillips and John Milsom provide invaluable liner notes.