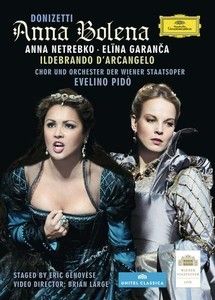 It's no accident that Netrebko's better forays into bel canto have come with Garanca by her side, inspiring her to some lovely singing. Their voices blend beautifully...I find her a welcome counterpoint... — International Record Review, May 2012 More…

With her sensational role debut at the Vienna State Opera, superstar diva Anna Netrebko displays a performance of rare vocal and dramatic power. The Russian soprano sings the role of the unjustly accused second wife of British King Henry VIII, ‘veering between indignant fury and tender righteousness’ and demonstrating a new level of confidence in her technique with excellent ‘passagework, particularly in trills, and seamless runs even to the lowest notes’ (Opera News).

It's no accident that Netrebko's better forays into bel canto have come with Garanca by her side, inspiring her to some lovely singing. Their voices blend beautifully...I find her a welcome counterpoint to Netrebko's passionate queen...Netrebko emerges from the challenge triumphantly. The sincerity in her performance is admirable, while the darker vocal qualities she possesses suit the character well.

[Netrebko] gives a demonstration of characterisation and bel canto vocal virtuosity that is second to none, Callas included...Garanca’s is a consummate interpretation by an artist at the top of her game...D'Arcangelo is a tall, handsome and seductive Enrico whose smooth singing only lacks a little lower extension... Pidò adds to his reputation in this music with a well-paced and phrased interpretation.

Shades of The Tudors in this great-looking Vienna State Opera production from 2011, with Ildebrando d'Arcangelo's glamorous Henry VIII exuding authority if not historical accuracy (Henry would have cut a far less seductive figure by the time of the events depicted in the opera!). Anna Netrebko gives one of her finest performances to date as a fiery but guilt-ridden Anne Boleyn, and her scenes with Elina Garanca's cool, superbly sung Jane Seymour are utterly enthralling.