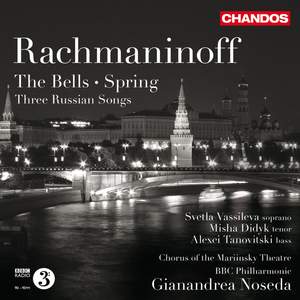 The Mariinsky's strongest suit is probably its distinctly Russian tone...Alas, the dramatic engagement one might have expected from an opera chorus is here virtually nonexistent...The Bells itself... — BBC Music Magazine, December 2011, 3 out of 5 stars More…

I. Over the Stream, the Swift Stream

II. Ah, Vanka, You Are so Dashing

III. My Cheeks, so White, so Rosy!

This is the seventh and final volume in our acclaimed Rachmaninoff series, which has been performed by the BBC Philharmonic under Gianandrea Noseda. They are joined in this recording by the Chorus of the Mariinsky Theatre and the soloists Svetla Vassileva, Misha Didyk, and Alexei Tanovitski. The disc was recorded live at this year’s Proms at the Royal Albert Hall, London.

Rachmaninoff composed his ‘choral symphony’ The Bells in 1913. It takes its inspiration from poems by Edgar Allan Poe in a Russian translation by the poet Konstantin Balmont. The first movement, evoking the chimes of silver bells on a winter sleigh ride, is unusually cheerful for both the composer and author, while ‘Wedding Bells’ blends the yearning of Wagner’s Tristan und Isolde with a darker and more ominous undercurrent that carries through to the end. Of this Proms performance, The Guardian wrote: ‘The soloists soared, the choir bloomed, and Noseda powered the orchestra through thrilling climaxes to the funereal closing bars.’

In the brooding cantata Spring of 1902, the restlessness and lively use of percussion reflect the composer’s mindset at the time: He was hungry to write music once again after suffering from a three-year bout of writer’s block and depression. The work is based on a poem by Nikolay Nekrasov and describes the return of the Zelyoniy shum, or ‘green rustle’. The poem tells of a husband who, fraught with murderous thoughts towards his unfaithful wife during the winter season, is freed from his frustrations by the return of spring.

The Three Russian Songs are poignant, gem-like time capsules of a Russia now irretrievably lost. They were written in 1926 when Rachmaninoff was living and exhaustively touring as a pianist in America. Vladimir Wilshaw, Rachmaninoff’s old friend from student days, said of this work: ‘Only a man who loves his country could compose this way. Only a man who in his innermost soul is a Russian. Only Rachmaninoff could have composed this!’

The Mariinsky's strongest suit is probably its distinctly Russian tone...Alas, the dramatic engagement one might have expected from an opera chorus is here virtually nonexistent...The Bells itself is beautifully played, but with rather literal fidelity to the score. This approach works well enough in the funereal final movement with its echoes of Isle of the Dead. Noseda's avoidance of rubato, though, rather misses the poetry of the golden bells.

The big moments in this live Proms recording - like the all-choral third movement, evoking supernatural 'alarm bells' - thrill the ear, with a professional Russian chorus to add extra quality, and there's fine solo singing in the other three movements.

Noseda handles [The Bells] skilfully, with sensitivity to the contrasted moods and to the orchestral detail as well as the balance with the chorus and soloists...and the grim finale is kept at a firm and solemn pace...[in 'Spring'] Tanovitsky broods impressively as the peasant, phrasing sensitively, and Noseda does well to make formal sense of the piece.

Noseda shapes both ['Spring' and the Three Russian Songs] works sympathetically but inevitably responds more vividly to the more expansive canvas of The Bells; all the performances have the benefit of the Russian soloists and the wonderful chorus of the Mariinsky Opera.