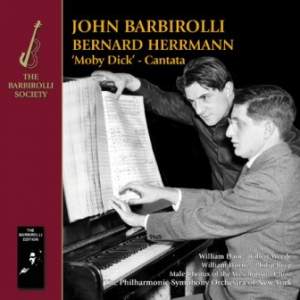 [William Hain] is on beautiful form, especially in the pastel-coloured aria 'It was a clear steel-blue day'. Barbirolli drives the drama along with an almost reckless glee...This 40-minute performance... — Gramophone Magazine, December 2011 More…

The ribs and terrors in the whale

At last anchor was up

Hist boys! Let's have a jig!

It was a clear steel-blue day

Sink all coffins and all hearses

Dark Dances of the Mardi Gras

When Barbirolli took up the position in New York, in succession to Arturo Toscanini, no less, he perforce came into contact with an indigenous American repertoire of which previously he would naturally have been unaware. A study of Barbirolli’s programmes during his ‘New York’ period reveals a surprising catholicity of repertoire, but within that repertoire may be found examples of American music that undoubtedly benefitted from his practical attention. The two works on this disc amply demonstrate that assertion.

The first, and the more significant, is a large-scale cantata by Bernard Herrmann, ‘Moby Dick’, based on the 1851 novel by the 19th-century American writer Herman Melville. It tells of one man’s obsession with capturing and killing a large white whale, responsible in an earlier encounter for the sailor losing his leg, the animal having been named Moby Dick. Herrmann was born in New York City in 1911, and wrote the cantata in 1936, and is scored for two soloists, male voice chorus and orchestra.

This performance was the world premiere. Few composers could wish for a finer first outing of their work than that given to the cantata by Barbirolli, but what makes this recording more valuable is that it is of the original version of the score, for when, over 30 years later, the music came to be published, Herrmann took the opportunity of revising the work slightly – so in this performance we not only hear the work in its original form, but also in a manner which will never be repeated.

Barbirolli and Herrmann selected highly gifted singers for the parts of Ishmael and Ahab: the American baritone Robert Weede (Ahab) was one of the finest of his generation, having made his Metropolitan Opera debut a little over two years prior to the ‘Moby Dick’ performance; he also gave lessons to Mario Lanza and scored his greatest success in the 1950s in Frank Loesser’s Broadway musical ‘The Most Happy Fella’. William Hain (Ishmael) was, by 1940, a well-established New York tenor, noted for his well-attended comprimario recitals rather than for his operatic work; William Horne, taking the much smaller part of Starbuck, went on to become best-known for singing the title role of Peter Grimes in the American premiere of Britten’s opera, conducted by Leonard Bernstein, in 1946 at Tanglewood. Barbirolli’s performance of Charles Wakefield Cadman’s ‘Dark Dances of the Mardi Gras’ was the first of this work by the New York Philharmonic- Symphony, although Cadman’s ‘Fantasy for piano and orchestra’ (as it is sub-titled) had been given its world premiere in the summer of 1933 at the Hollywood Bowl with the composer as soloist (as he is in this recording). Barbirolli’s performance in December 1937 marked the work’s fourteenth performance in America – indicative of the impact the work had soon made. In this performance, we can certainly admire the composer’s virtuosity alongside Barbirolli’s generous and committed orchestral support.

[William Hain] is on beautiful form, especially in the pastel-coloured aria 'It was a clear steel-blue day'. Barbirolli drives the drama along with an almost reckless glee...This 40-minute performance is full of pep and palpable excitement.