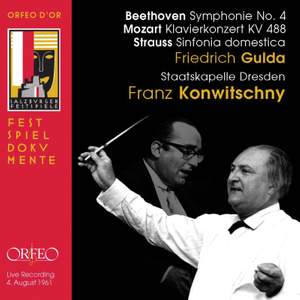 In 1961, the visiting orchestra to Salzburg was the Dresden Staatskapelle. The 'magic harp', as it was known, certainly justified its reputation under Franz Konwitschny, who confirmed his own standing as one of the leading representatives of the traditionally 'heavy' style of music-making in the German Classical and Romantic repertory.

Beethoven’s Fourth Symphony was notable for its powerful contrast between darker and lighter orchestral sonorities, and much the same was true of Mozart’s Piano Concerto in A major K 488, in which the soloist was no less a luminary than Friedrich Gulda, whose playing was remarkable for its subtly contoured interaction with the orchestra but who was also able to bring to the piece a note of virtuosity and, in the Adagio, an overriding calm.

The Staatskapelle’s concert under Konwitschny ended with Strauss’s 'Sinfonia domestica': a vast portrait of the Strauss family drawing on the orchestra’s full palette of tone colours.