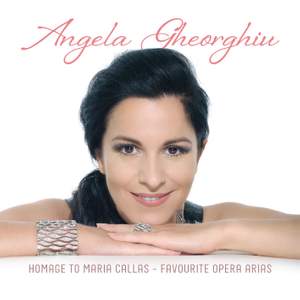 it's generally good news. The bloom in the middle of the voice may have lost its sheen, but the top is as glorious as ever and the lower register is edging Gheorghiu towards the spinto repertoire...What... — BBC Music Magazine, December 2011, 4 out of 5 stars More…

Homage to Maria Callas is a collection of beloved French and Italian operatic masterpieces performed by Angela Gheorghiu, the defining diva of this century. The programme is inspired by the career and recordings of Maria Callas, the greatest diva of the last century. The arias are shared favourites of both Callas and Gheorghiu, and Angela’s new recording demonstrates once again her extraordinary vocal and emotional range.

Angela Gheorghiu said recently, “Callas was original in everything she did; she was a phenomenon. In every performance she gave her all. She was the most wonderful painter and you can always hear exactly the right colour in her voice. Just hearing her sound, you understand all the power or fragility of her emotions. That's a rare talent and a great gift.” Gheorghiu continued, “EMI was her record label and it’s mine too. It feels like a family”.

Recorded at London’s iconic Abbey Road Studios in London and in New York, the repertoire of Gheorghiu’s first studio recital in six years (during which time she recorded several complete operas, including a multi-award-winning Madama Butterfly), shows her versatility in lyric, spinto and mezzo roles, with each of which she feels a strong emotional connection. These include Mimi (La bohème), Marguerite (Faust), Imogene (Il pirata), Adriana (Adriana Lecouvreur - an opera which Gheorghiu added to her repertoire in 2010 to great critical acclaim), Maddalena (Andrea Chénier), Nedda (Pagliacci), Wally (La Wally), Medea, Chimène (Le Cid) and Delilah (Samson et Delilah). The new album also includes two arias from the opera that launched her career: La traviata by Verdi, New York Magazine praised at the time that “Her lady of the camellias is a worthy successor to Garbo and Callas.” Here she sings Violetta’s closing scene from Act I, in which the heroine wonders whether it is worth sacrificing her precious freedom to take young Alfredo as a lover. ‘It was very important for me to have this aria here. I’ve sung the role a lot on stage, but I haven’t ever recorded it in the studio’ adds Angela.

Angela Gheorghiu was born in Romania. In 1992, she made her international debut at the Royal Opera House Covent Garden, followed the same year by debuts at the Metropolitan Opera and the Wiener Staatsoper. Since then, she has graced the stages of the world’s opera houses and concert halls, excelling both vocally and dramatically. Today, at the height of her career – and looking as glamorous as ever - she is widely recognised by critics and opera lovers as one of the great sopranos of all time.

In 1998, Gheorghiu signed an exclusive contract with EMI Classics for whom she has recorded Puccini’s Madama Butterfly, Tosca and Il trittico, Massenet’s Manon and Werther, Gounod’s Roméo et Juliette, Bizet’s Carmen and Verdi’s Il trovatore, several duet albums with Roberto Alagna and concerts with orchestra or choir and orchestra including Verdi’s Requiem, Live from La Scala, Live from Covent Garden, Casta Diva, My Puccini, and Diva.

She has collaborated with Sir Georg Solti, Giuseppe Sinopoli, Claudio Abbado and Antonio Pappano, among others. Her performances as Marguerite in Gounod’s Faust, Magda in Puccini’s La rondine and Mimi in La bohème with the Royal Opera House and the Metropolitan Opera have been released on DVD by EMI Classics. Gheorghiu’s discography and videography have received wide critical acclaim and many prestigious awards in the UK, France, Belgium, German, Italy, and the United States.

After Angela Gheorghiu’s July 2011, performances as Tosca with Jonas Kaufmann and Bryn Terfel at The Royal Opera House under the baton of Antonio Pappano, The Independent wrote, “Gheorghiu, like Tosca, is a born diva.” The Guardian added, “Her bloodcurdling outburst at the realisation that [Mario] is dead, not merely pretending, reminded us why this Romanian diva draws the crowds.” This production will be screened in cinemas around the world in the autumn.

- Standard Edition consists of a CD in a digipack with a booklet excerpting Gheorghiu’s essay. Both Deluxe and Standard editions feature song texts in English, French, German and the original language, if different, as well as booklet text in all three languages;

it's generally good news. The bloom in the middle of the voice may have lost its sheen, but the top is as glorious as ever and the lower register is edging Gheorghiu towards the spinto repertoire...What both [Callas and Gheorghiu] share is an unfailing instinct for the right dramatic choice. So Gheorghiu's Mimi is now tough as well as tender and her Violetta...a woman who knows that Alfredo is her last romantic roll of the dice.

Gheorghiu is always recognisably herself...Marco Armiliato's lively accompaniments second his soprano when she is at her most urgent. Together, they cap the recital with a riveting account of Violetta's Act 1 scene, where she really shines - not Callas back from the dead but Gheorghiu plain and simple, and full of life.

In such a legato-dominated programme, Armiliato's ability to breathe with his singer is welcome, as is the loveliness of the RPO's playing.

she occupies [Callas's] role with aplomb. Gheorghiu animates these arias with such gusto that her interpretations sometimes border on the eccentric, so enthusiastic is her characterisation; but there's always a repository of effortless technique to draw upon...for emotional impact, the honours must go to her interpretation of "Ebben? ne andrò lontana", from La Wally.