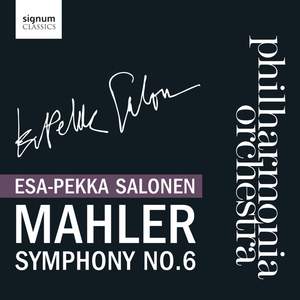 Sometimes known as ‘The Tragic’ – a title suggested but then withdrawn by the composer – Mahler’s Sixth Symphony embodies much of the inner turmoil and superstition of its composer. Conceived at perhaps one of the happiest periods of Mahler’s life, it seems to foreshadow the personal tragedies that would later befall him – with his wife Alma writing that “The music and what it foretold touched us deeply.”

Esa-Pekka Salonen’s work with the Philharmonia for the 'City of Dreams: Vienna 1900-1935' concert series has produced a number of powerful, live concert recordings for the Philharmonia series, including Schoenberg’s 'Gurrelieder', Berlioz’s 'Symphonie Fantastique' and Mahler’s Symphony No.9 – all of which have been praised by critics following their release on Signum Classics.

these suites have tended to fall in the shadow of Bach’s great keyboard exercises. Smirnova shows what we – and most pianists – have been missing, for she paints the gigues, fugues and sarabandes with such spirit and wit that it’s impossible not to be won over by their joy and sophistication.

The Philharmonia plays with well-mannered grace, but it’s all too even-tempered...All told, this is a thoroughly professional off-the-cuff performance, rather than the product of special commitment and rehearsal

In showing how Mahler opens the door to new possibilities, Salonen's appraoch is consistently hard-edged and unfussy, although he will occasionally take a passage haltingly as if intensifying the gloom...Rubato is carefully rationed, which makes much of the score turn mechanistic and dark. The Andante alone seems rather pale; the finale is uncommonly cogent.

[an] electrifying performance...Salonen suggests continuity by taking first and second movements at the same, slightly brisker speed. The Philharmonia benefits from some wonderfully aristocratic horn playing

If a gorgeously refulgent sound and heaven-storming rhetoric are what you look for in a recording of Mahler’s 6th Symphony, this one won’t be your first choice. If an intelligent and subtle shaping of its huge span and alertness to each telling detail count for more, you’ll find it richly rewarding. The delicacy of the Philharmonia’s playing is miraculous, particularly in the lovely andante movement.