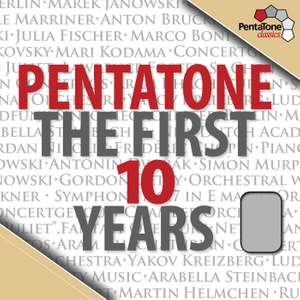 I. Pezzo in forma di Sonatina

I. Allegro (cadenza by L. Vogt)

II. Waltz of the Ancestors

Getty: The Fiddler of Ballykeel

The first in a projected cycle of Wagner’s ten major operas from Marek Janowski and the Rundfunk Sinfonieorchester Berlin stars Albert Dohmen in commanding form as the accursed sailor looking for love, Matti Salminen as a first-rate Daland, and Ricarda Merbeth as a stentorian Senta.

This is a box with 10 SACDs to celebrate PentaTone's 10th anniversary. From each year of PentaTone's existence we have taken one SA-CD. Not necessarily the best sellers and award winners, but a fine selection presenting as much as possible all the artists PentaTone is/has been working with. As a bonus we have added a sampler SA-CD with tracks of other PentaTone albums (so the box includes 11 SA-CDs). On this sampler you will also find surround sound effects and test tones (which enable to adjust the position of the speakers of a HiFi set into the ideal position).