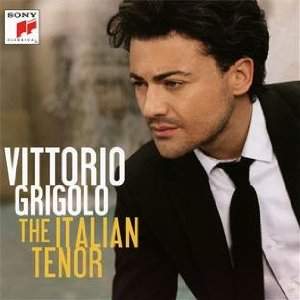 Now and then there are hints of another great Italian-style tenor, the stylish Alfredo Kraus. It's there in the hushed tone Grigolo adopts for the 'Favorita del re!...Spirto gentil' from La Favorita... — BBC Music Magazine, November 2010, 3 out of 5 stars More…

Sony Classical proudly announces the release of the debut recording on the label by the highly-acclaimed young tenor Vittorio Grigolo. Acknowledged by critics and public alike as the finest exponent of the Italian tenor tradition in a generation, this album is one of the most eagerly-awaited releases of 2010.

Vittorio Grigolo says that his first operatic recital disc, "The Italian Tenor", has been a project of great importance for him. He has purposely waited until he felt the conditions were perfect and he had something unique to communicate in this repertoire. He has chosen a programme of arias representing "the culture I come from. It's like giving my card to someone who doesn't know me the voice of the Italian tenor, with a communication that comes in a natural way, like opening a window on a sunny day!"

Vittorio Grigolo was born in Arezzo, Tuscany and grew up in Rome. A soloist in the celebrated Sistine Chapel Choir as a child, he appeared at the Rome Opera as the Pastorello in "Tosca" opposite the great Luciano Pavarotti when only 13 years old. He has since gone on to conquer the world's major opera houses and festivals, collaborating with outstanding singers and today's greatest conductors including Riccardo Muti, Zubin Mehta, Antonio Pappano, Riccardo Chailly, Lorin Maazel and Daniel Oren. His natural charisma and outstanding dramatic abilities complement a voice that possesses all the unique attributes of the Italian tenor: beautiful tone, effortless production and stylish phrasing, qualities which are fully displayed on this album.

Now and then there are hints of another great Italian-style tenor, the stylish Alfredo Kraus. It's there in the hushed tone Grigolo adopts for the 'Favorita del re!...Spirto gentil' from La Favorita and Manrico's elegant swagger in the cabaletta 'Di quella pira'.

This is quite a test for the tenor who's had an outstanding year on stage, but one he passes with ease...Grigolo has developed from light to lyric tenor, and you feel there's more to come from this young voice already rich with plenty of colour and drama.

His bright, incisive tones modulate, soften and sweeten, yet the voice has a non-departmentalised consistency, a supple and expressive instrument in grief and gaiety, tenderness and anger...for a comparison, the young Bergonzi might come to mind, but Grigolo's expressiveness and imagination are quite his own

He's notably good at scamps, such as Rinuccio in Gianni Schicchi, or tragic wits such as Riccardo in Un Ballo in Maschera, where you get a real sense of the laughter behind the passion. There are moments of wonderfully rapt introspection, too, in arias from Donizetti's La Favorita and Puccini's Le Villi.

He lends suitable swagger to "Possente amor mi chiama" from Rigoletto and brings real tenderness to "Spirto gentil"...Grigolo is the real thing: a shining, stylish romantic hero in the great tradition of the Italian tenor, but with a warmer, more appealing persona for 21st-century audiences.

He can get overexcited, but shows musical sensibility in arias from La favorita, Rigoletto and Manon Lescaut, and his clear diction and firmly produced tone suggest solid technical foundations.

Grigolo’s voice is agile, unstrained, with colours stretching from dulcet cream to piercing red; and strikingly subtle volume control...when the voice needs to “ping”, it does so securely, with lively expression. It’s a good, steady album, and a worthy calling card

The Independent on Sunday 30th September 2010

Handsome, prolific and blessed with uncommon interpretive skills, Vittorio Grigolo is the most exciting young male talent in opera today...It's a marvellous collection, with Grigolo's dramatic abilities abundantly evident in the fruity relish with which he rolls each syllable round his mouth