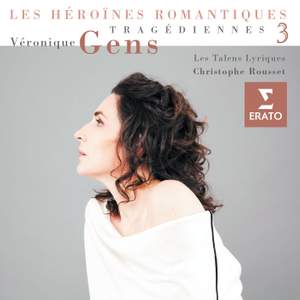 Though many of these arias were written with a mezzo-soprano range in mind, their dark shades are generally a good match for Gens's sultry voice...Rousset directs throughout with bracing energy:... — BBC Music Magazine, December 2011, 5 out of 5 stars More…

In her third ‘Tragédiennes’ album for Virgin Classics, French soprano Véronique Gens continues her exploration of the highways and byways of the French operatic repertoire, this time covering the late 18th and 19th centuries and with a prime focus on roles for the deeper, darker-toned female voice.

The French soprano Véronique Gens, joined once again by Christophe Rousset and Les Talens Lyriques, continues her exploration of the highways and byways of the French operatic repertoire with this, her third ‘Tragédiennes’ album. It covers the late 18th and 19th centuries and travels from Carthage and Palestine to the Pyrenees, Tudor England and 16th century Germany, and alongside such names as Gluck, Berlioz, Meyerbeer, Verdi (his Don Carlos, written in French for Paris), Saint-Saëns (his rarely heard Henri VIII rather than Samson et Dalila) and Massenet, features composers who no longer hold a place on the world’s operatic stages: Gossec, Méhul (much admired by Berlioz), Mermet and Kreutzer (the violinist and dedicatee of Beethoven’s sonata).

Perhaps surprisingly, Gens’ main emphasis in this recital is on arias written for mezzo soprano, but there have always been darker shades in Gens’ timbre and French composers of opera created some of their most impressive roles and arias for the deeper-toned female voice. In fact, this recital makes explicit tribute to a series of Parisian divas would today probably be classified as mezzo sopranos: Marie-Thérèse Maillard, Cornélie Falcon (who gave her name to a particular sub-category of voice – a high mezzo/deep soprano), Rosina Stoltz and Pauline Viardot. Even Marie-Constance Sass, the first singer of the magnificent soprano aria ‘Toi qui sus le néant’ from Verdi’s Don Carlos – better known in its Italian version, ‘Tu che la vanità’ and now often sung by lyric sopranos – was also the creator of the sultry ‘falcon’ role of Sélika in Meyerbeer’s l’Africaine.

That Gens can hold her own in such exalted historic company becomes clear from the BBC Music Magazine‘s assessment of her last ‘Tragédiennes’ album: “Passion, ardour, rage, tenderness – the full gamut of human expression emerges in this selection of works created for French operatic femmes fatales … Music director Christophe Rousset and soprano Véronique Gens’s second disc of musical ‘Tragediénnes’ is a thrilling mix of the familiar … and the little known … The whole makes a wonderful odyssey … Gens’s agile voice is the perfect vehicle to cope with these emotional extremes, from the enchanting to the chilling. She is never afraid to sacrifice pure beauty of sound in favour of rhetorical and dramatic effect, giving due weight to the plights, laments and plangent outpourings of these timeless, tragic heroines. Rousset coaxes some crack playing from Les Talens Lyriques, combining the immediacy and intimacy of chamber music with all the colours and intensity of a large-scale symphony orchestra.”

Though many of these arias were written with a mezzo-soprano range in mind, their dark shades are generally a good match for Gens's sultry voice...Rousset directs throughout with bracing energy: rhythms are razor-sharp, orchestral colours vivid. His period orchestra never overwhelms the soloist, so Gens's every word cuts through with thrilling, and often chilling, drama. Virgin's recording sound is clean and detailed. In short, intense but compelling listening.

she tackles roles usually assigned to mezzo-sopranos, such as Fidès in Meyerbeer’s Le Prophète, Didon in Berlioz’s Les Troyens and Massenet’s Hérodiade, but her shining soprano is especially gorgeous in the rarities...Rousset’s period band supplies luxury support.

Her focused timbre brings piercing clarity to a raft of rarities...[in the Don Carlos aria] the superb open, pure brass and wind of Les talens lyriques under Christophe Rousset make one yearn for this whole opera on old instruments.